As we mentioned quite a few times earlier, the Shuttle XS35GTA V3 is a completely silent system which can’t be said of many other HTPCs. The fully silent feature does have its advantages but also comes with a price and as you can see from a picture below, the CPU temperature tends to climb as high as 84 degrees Celsius, while the GPU temperature can climb as high as 71 degrees Celsius. 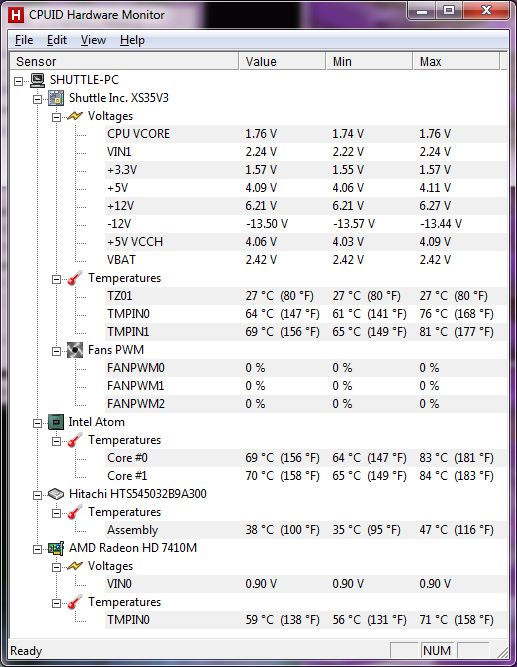 Of course, bear in mind that these temps are highest values that we got after a few hours of extensive benchmarking.

We even decided to put those 24/7 claims to the test and left the little Shuttle XS35GTA V3 idling for a few days and we can happily report that it went without a hitch.

We decided to measure the power consumption and ended up with pretty much same values that Shuttle wrote in its specification and feature list. Under idle mode in Windows 7, when OS actually powers down the HDD and turns off the display, Shuttle’s XS35GTA V3 pulls around 15W from the power outlet. On idle desktop without any active applications, Shuttle pulls around 20W. Light surfing with few tabs and Crytek’s CryEngine3 tech-demo running on YouTube in 720p draws an average of 24W. The maximum load that we managed to pull off was around 26W.

Of course, bear in mind that our test bed did not include an optical drive so you should add a few Watts for it as well in case you decide to pair it up with slim Blu-Ray optical drive.