Performance and everyday use

We already had a couple of HTPC units in our hands earlier and one of them was Zotac’s ZBox AD02 Plus that features AMD’s E-350 APU as well as Sapphire’s Edge HD2 based on dual-core Atom D525 1.8GHz CPU paired up with Nvidia’s ION 2 GPU. We also included results from Sapphire’s Pure White motherboard also based on E-350 APU.

In terms of sheer CPU power, the dual-core Atom D2700 is certainly much faster than E-350 CPU part as well as the 1.8GHz D525 Atom. As we noted earlier, the main disadvantage of the D2700 is its GPU part, but in case of Shuttle’s XS35GTA V3, this is not a problem since the integrated GPU is disabled and switched to AMD’s quite decent Radeon HD 7410M GPU with 512MB of GDDR5 dedicated memory. 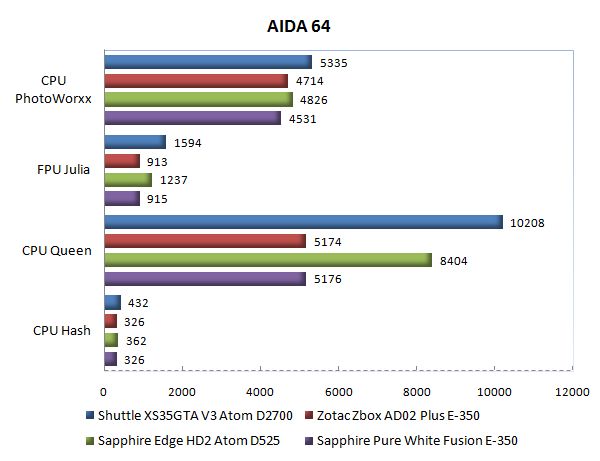 In order to check out the power of the GPU we decided to check Futuremark’s 3DMark 06 since we already had results from both Sapphire Edge HD2 and Zotac’s ZBox AD02 Plus and it is clear that HD 7410M, paired up with D2700 has more than enough power to compete with both AMD’s E-350 APU and Atom D525/ION2 combination. 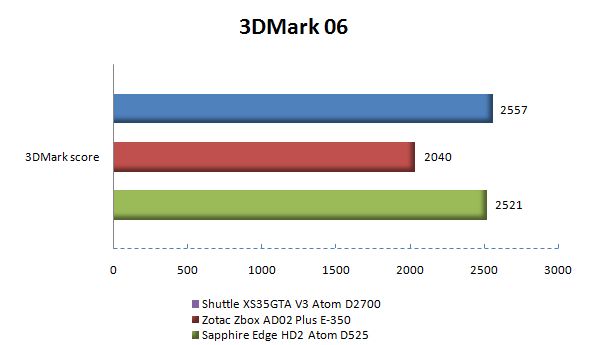 The same thing goes for Cinebench R11.5 as Shuttle’s XS35GTA V3 clearly has a much better GPU and pretty decent CPU as well. 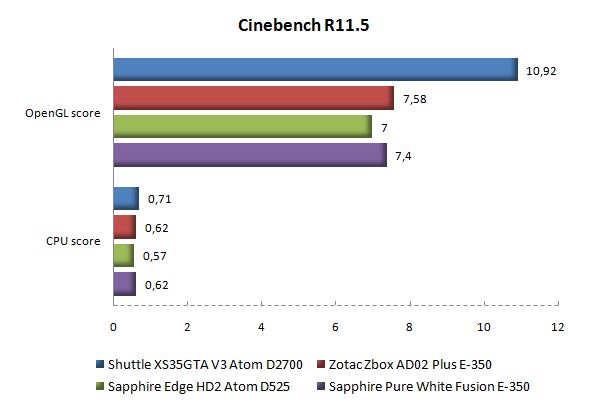 The PCMark 7 results are sort of a mixed bag, but they are clearly dependant on the choice of the HDD as system in most parts of the benchmark, the XS35GTA V3 clearly steams ahead of the ZBox E-350 APU but in some tests it lags behind. Of course, nothing stops the user to go for a speedier 7200rpm 2.5-inch HDD or even a hybrid drive or SSD and get some impressive numbers on that side as well. 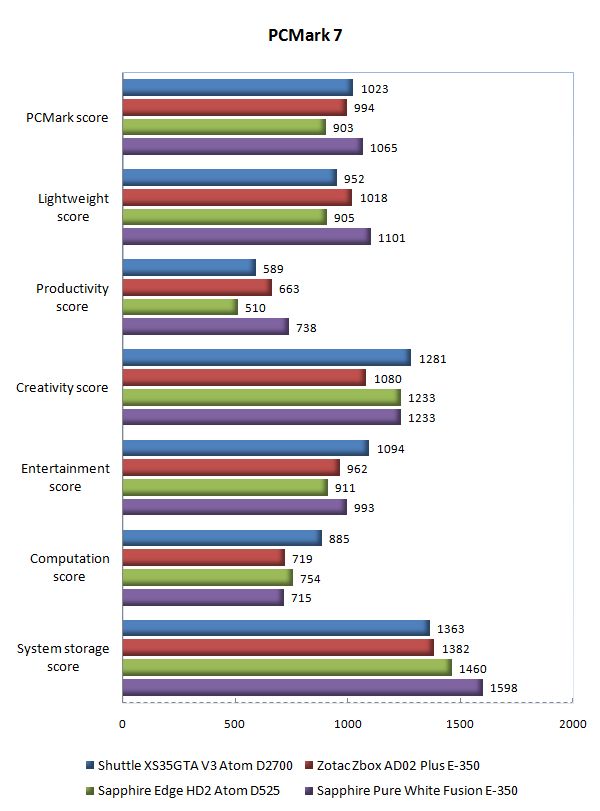 We did not bother with HDD testing as we got the barebone version of the XS35GTA V3 so these scores solely depends on which HDD gets plugged in.

We used the XS35GTA V3 for some casual internet surfing, media playback and even some office work while it remained connected to the 1080p capable TV and we must say that we were quite impressed as it handled everything that we threw at it with ease.

We only regret that we did not test the Blu-Ray and 3D video playback but we simply did not have neither the slim Blu-ray drive nor the 3D-capable TV or monitor so we will leave that for some other time. Of course, according to the specs, AMD’s Radeon HD 7410M support full HD decode and Blu-Ray playback thanks to the third generation Unified Video Decoder so we doubt there will be any problems with that as well.