To be perfectly honest, I assumed benchmarking the T100 would be a breeze, as it’s an all-integrated product with just a couple of different SKUs. However, it’s not a PC, so the standard range of PC benchmarks just doesn’t tell the whole story. How could we use the results to compare it to an iPad, or an Android tablet? No matter what we do, it still would paint the full picture, so let’s start with a brief look at what makes the T100 tick.

The T100 is based on an Atom Z3740 quad-core processor clocked at 1.33GHz, but it can hit 1.86GHz on Turbo and the good news is that it can stay there. In our experience it does not throttle very much, the design clearly has room for higher clocks and it shows. The T3740 is a 4W part and while it is marginally slower than the Z3770 it is no slouch. The price difference between the two chips is just a few bucks and although the T100 is a value product, it is easy to argue that Asus should have gone with the Z3770, which maxes out at 2.39GHz on Turbo. Bay Trail features new Intel HD Graphics with four execution units clocked between 311MHz and 896MHz.

We have already discussed the Bay Trail architecture and Intel graphics in depth and most of our readers don’t need any background info.

The Z3740 can wipe the floor with old Cedarview dual-core parts and in some scenarios it is twice as fast. It is faster than AMD’s new Temash parts, too, although Temash has a much better GPU. In terms of GPU performance, it can usually outpace older Atoms by a factor of 3, but looking at online benchmark databases, AMD’s new Jaguar parts have the upper hand in almost all GPU benchmarks. I have to add a big caveat here. Jaguar APUs deliver much better performance in the latest releases of 3DMark and in some relatively recent titles, but the difference in 3DMark 05/06 is not nearly as big. Since you can’t run the latest games on either of them, AMD’s huge advantage simply isn’t as relevant as it appears. If they had enough muscle to run two to three year old games, AMD would be in a huge advantage. However, in older titles the lead evaporates. In other words, choosing a Temash-based product solely on account of superior GPU performance just doesn’t make sense.

The Windows Experience Index is dead - as of Windows 8.1 it is a thing of the past and it won't be missed, as it never caught on. However, we decided to include a WEI score from a third-party application as anyone can look up the WEI on their notebook in a matter of seconds.

In 3Dmark Ice Storm the T100 managed to score 16923 in the second run, which is not bad all things considered. We did, however, experience some driver compatibility and stability issues. In PCMark 7 we scored an average of about 2300 points and it could have gotten a bit more had it not been for the storage. In Cinebench CPU tests it also manages to outpace old Atoms by a factor of two and it outperforms Temash by about ten percent in multithreated tests, but it falls short in single-threaded tests. 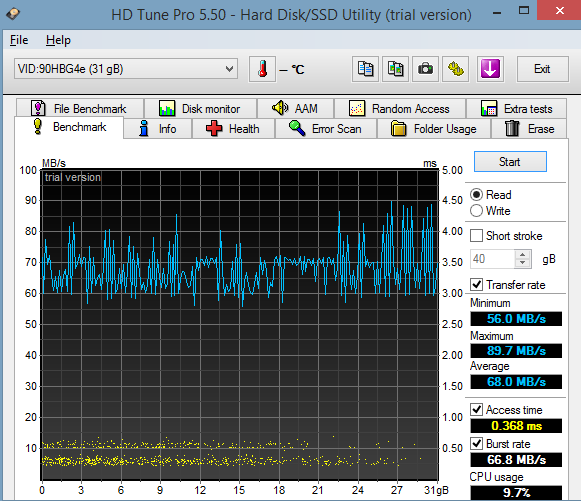 The biggest bottleneck by far is the sluggish eMMC storage, courtesy of Hynix (HBG4e). The 32GB unit does not come close to high-end SSDs, but luckily it is not as slow as one might expect from an embedded eMMC solution. Read speeds easily top 100MB/s, while write performance is limited to about 40MB/s. On phones and low-end tablets this would be great, but we just feel a lot of potential is being wasted due to relatively slow eMMC storage on the T100. 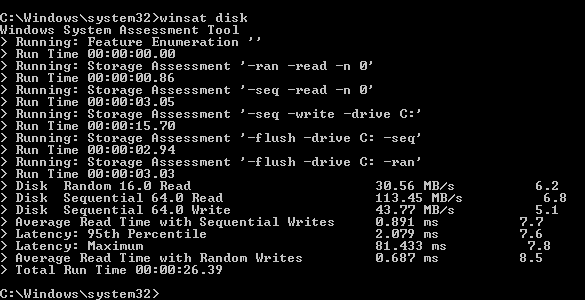 Bottom line, the T100 could have ended up quite a bit faster had Asus gone the extra mile, with a faster Z3770 processor, 4GB of RAM and a proper SSD, but that would add at least $70-$100 to the retail price. Overall the fact that you can even get this sort of performance from a 4W chip in a fanless $349 tablet is very impressive to say the least.