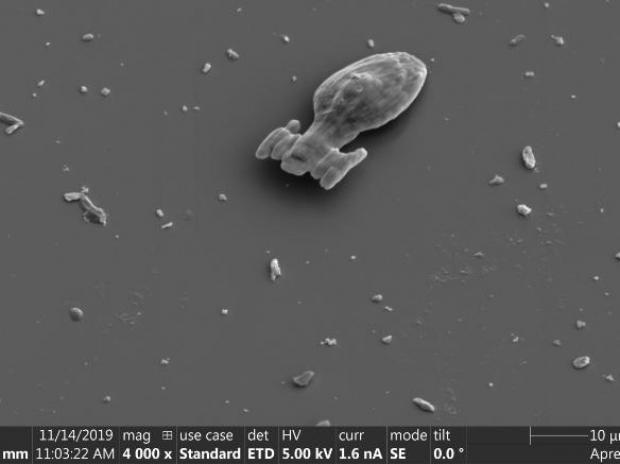 The Borg will never see it coming

A team of physicists at a university in the Netherlands have 3D-printed a microscopic version of the USS Voyager, an Intrepid-class starship from Star Trek.

The miniature Voyager, which measures 15 micrometers (0.015 millimeters) long, is part of a project researchers at Leiden University conducted to understand how shape affects the motion and interactions of microswimmers.

For those not in the know, microswimmers are small particles that can move through liquid on their own by interacting with their environment through chemical reactions. The platinum coating on the microswimmers reacts to a hydrogen peroxide solution they are placed in, and that propels them through the liquid.

One of the authors of the study Samia Ouhajji said: "By studying synthetic microswimmers, we would like to understand biological microswimmers. This understanding could aid in developing new drug delivery vehicles; for example, microrobots that swim autonomously and deliver drugs at the desired location in the human body."

In their project, the physicists also printed shapes like boats, trimers and helices, with each object's shape affecting their swimming behaviours.

No mention of whether a micro-Voyager will take longer to get back to the Alpha quadrant or whether it contains an annoying micro-Nelix.

Last modified on 10 November 2020
Rate this item
(0 votes)
Tagged under
More in this category: « Antitrust action against Amazon expected today Apple caught in another child labour scandal »
back to top