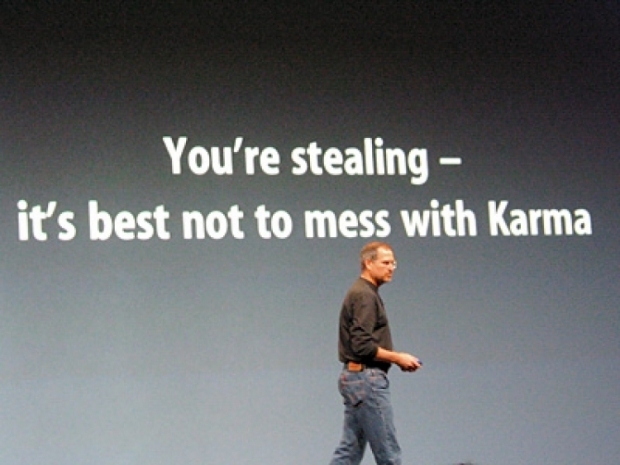 Fruity cargo cult Apple is still peddling the myth that it invented the touchscreen smartphone by claiming that Samsung copied them.

Of course, those around at the time know that neither Apple or Samsung invented the smartphone and were comparative latecomers to that market, but that has not stopped Jobs’ Mob from still whinging that Samsung stole its glory.

In a new documentary about the evolution of the iPhone, Apple's marketing chief Greg Joswiak was seen calling Samsung "annoying" and accusing them of poorly copying Apple's technology.

"They were annoying," said Joswiak. "And they were annoying because, as you know, they ripped off our technology. They took the innovations that we had created and created a poor copy of it, and just put a bigger screen around it. So, yeah, we were none too pleased."

Samsung launched the Galaxy S4 with a 5-inch display in early 2013, at a time when the iPhone 5 had a 4-inch display. Apple did eventually release its first larger smartphones with the 4.7-inch iPhone 6 and 5.5-inch iPhone 6 Plus in 2014, and the devices were met with strong demand and went on to be among the best-selling iPhone models ever.

Apple sued Samsung in 2011 for patent infringement, alleging that Samsung copied the iPhone's design with its own Galaxy line of smartphones. Apple was initially awarded around $1 billion in damages, but the amount was lowered in a subsequent retrial.

In 2018, Apple finally settled with Samsung and reiterated the following statement: "We believe deeply in the value of design, and our teams work tirelessly to create innovative products that delight our customers. This case has always been about more than money. Apple ignited the smartphone revolution with iPhone and it is a fact that Samsung blatantly copied our design. It is important that we continue to protect the hard work and innovation of so many people at Apple. We're grateful to the jury for their service and pleased they agree that Samsung should pay for copying our products."

The first mobile phone with a capacitive touchscreen was LG Prada which was announced and released before the iPhone. After the release LG stated publically it believed Apple had stolen the idea from the KE850 after it was announced as part of the iF Design.

Last modified on 29 June 2022
Rate this item
(0 votes)
Tagged under
More in this category: « Arm details client roadmap until 2024 Nothing confirms Snapdragon 778G+ for phone (1) »
back to top