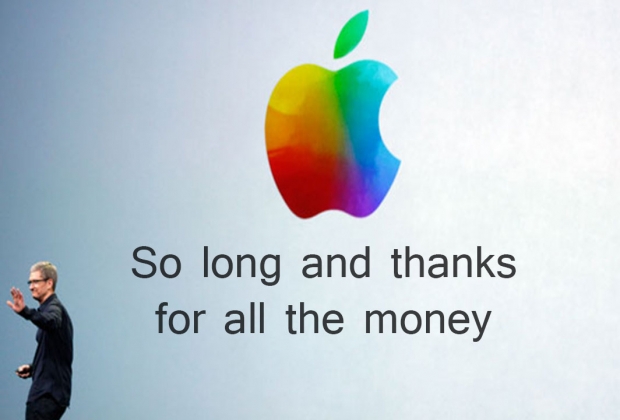 Wall Street fears iPhone not doing as well as marketed

The Fruity Cargo cult Apple is facing problems with Wall Street analysts who are refusing to repeat what its marketing department is telling them about the iPhone.

Apple has so far managed to avoid the downturn in smartphones by opening in new markets or making releases earlier to make figures look better. Wall Street however is not convinced, and a number of analysts are predicting a slump for the fruity cargo cult.

Jobs’ Mob also has the problem that the tablet craze has died down and the iPod has gone the way of the hula-hoop, the iWatch proved never to be the fad that Apple hoped either. In short, it is a company out of ideas and leaning too heavily on a product which is headed for a downturn.

Bank of America cut its estimate for fiscal 2016 iPhone shipments by 10 million to 220 million, pointing to a weakening among Apple's suppliers.

As a result, Apple shares are on a downward trend falling 4.4 per cent. The drop in share price or phones is not much, but Apple’s growth depends on people believing that it can pull another rabbit out of a hat. Once that reality distortion field is shattered things could go pear-shaped very quickly.

Most of this is confirmed by Apple’s suppliers who are seeing reduced orders from the fruity cargo-cult. Imagination Technologies said softness in the overall semiconductor industry and smartphone market meant its operating profit would be lower than expected for the rest of its fiscal year.

Dialog Semi also cut its outlook, citing softer-than-expected demand for chips used in mobile phones such as the iPhone.

Morgan Stanley said in a note on Sunday it expects iPhone unit sales to drop 6 percent in the 2016 calendar year as higher prices in markets outside Americas, excluding China, and maturing smartphone penetration in developed markets weigh on upgrades and new user growth.

Last modified on 17 December 2015
Rate this item
(8 votes)
Tagged under
More in this category: « Samsung Galaxy A9 is super-sized Xiaomi might miss sales targets »
back to top