Geforce RTX Turing to rule the high end in 2019 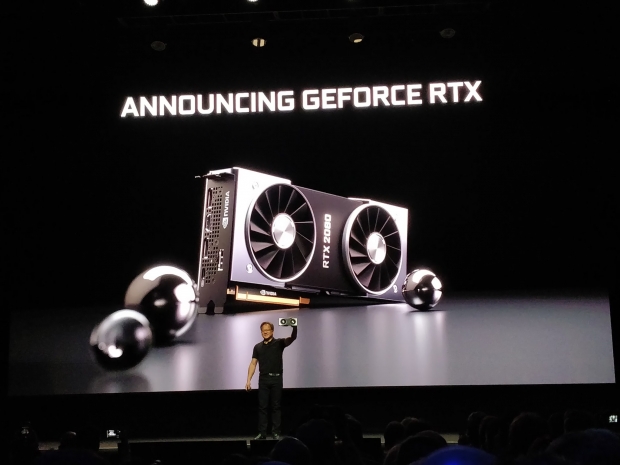 It will be extremely hard and almost impossible for AMD to stay relevant in performance and high end gaming. With the introduction of Geforce Turing based 20 series RTX cards, Nvidia is putting in place a hard to reach distance between AMD Radeon graphics and Geforce. When we say Nvidia will rule high end in 2019, we of course mean the rest of 2018 too.

Withour Raja Koduri at the helm of Radeon, Geforce Touring will be very hard to defeat or even challenge. Raja’s team did well in making Radeon relevant again, winning significant market share but his exit put a stop to some important steps in Radeon development. Vega wasn’t as good as many expected but it was a step in the right direction.

For example, the fact that Vega 7nm won’t make it to a gaming part, at least not on something that competes with “reasonably” priced Geforce RTX non-Titan parts was tough but probably a reasonable decision.

AMD Radeon fanboys dream about some secret stealth project and AMD’s big splashes come back, but to all of our knowledge and almost 20 years in this industry, this is not happening.

Navi comes late to the game to fight in the mid market, most likely a few quarters after Nvidia launches 2060 RTX or a mainstream part of Turing architecture and a replacement for the GTX 1060.

Bear in mind that CEO Lisa Su did save AMD but had to make some really hard choices. It didn’t have enough resources to fight Intel and Nvidia on all the gaming GPU and PC processor fronts. This led to the fact that AMD missed one big important technology that makes a lot of money for both Nvidia and Intel, AI. It does play in this market but it is very marginal as it is  fighting for scraps between some big names that include Nvidia Volta, IBM Power PC, Intel Xeon and Phi and most recently Xilinx with its new FPGA AI solutions.

AMD betting on EPYC was the right decision but jeopardizing more than 20 years of Radeon in the process was probably not going to fly well among gamers. There is absolutely no scenario where we see Radeon being relevant in mainstream and especially performance market as after Vega 64 AMD has nothing and won’t have anything for more than another year .

Yes, we are well aware that before you even finish that many will jump on us and accusing us of being biased and pro-Nvidia, green, well you name it. Over the last few decades I was called Red and Green depending on the given story and this won't change anytime soon. History doesn’t apparently teach humanity not to kill the messenger, and our job is to inform you and stay impartial.

Ray tracing was a step in the right direction but to be honest Nvidia made the big Turing chips for AI but with gaming in mind. Ray tracing was and will be the holy grail of computer graphics and yours truly even wrote a paper about the Ray Tracing Monte Carlo model. Ray tracing is expensive to calculate as you need to take to account for every possible ray and pixel and calculate interaction in order to mimic the real world. Don’t get misled, as Geforce RTX and even Quadro RTX will only accelerate one part of the scene as "photo realistic" scenes are still years and possibly decades away. More transistors are needed and that is directly interconnected to TSMC/Samsung/GlobalFoundries/Intel and other fabs to go to 7nm, 5nm, 3nm and even smaller.

Gaming will continue to be Nvidia’s cash cow but the success of its data center/AI division and later automotive ADAS offering will most likely take over gaming revenue. It won't happen in the next few quarters but eventually it will happen. Gaming will always stay relevant but the AI potential of making sense of data is worth 10s of billions of dollars, surpassing  Geforce revenue by several times.

Let’s come back to Navi again. Navi is mainstream, it replaces the 580 and 570 and it will be a good chip for this market segment but it will - according to all of our sources - come very late to the game. It won’t come out until later part of 2019 according to our knowledge and industry sources and even that delayed timing could be very optimistic.

Again, Nvidia’s total domination is not good for market, unless you are Nvidia. It can dictate and jack up prices and traditionally it always did. Nvidia was always all about making the best technology while making a lot of money on top of that. It takes billions of dollars to develop technology as complex as Turing but then Nvidia wants to return the investment via sharing the technology to AI, Automotive, Gaming, Quadro processional graphics.

Traditionally, decreased competition and lack of crypto currency mumbo jumbo hype will make gamers buy the best and that will be Geforce RTX for the foreseeable time, at a saucy price.

Last modified on 21 August 2018
Rate this item
(0 votes)
Tagged under
More in this category: « MSI and Palit Geforce RTX 2080/2080 Ti smile for the camera Nvidia Geforce RTX series officially launches »
back to top