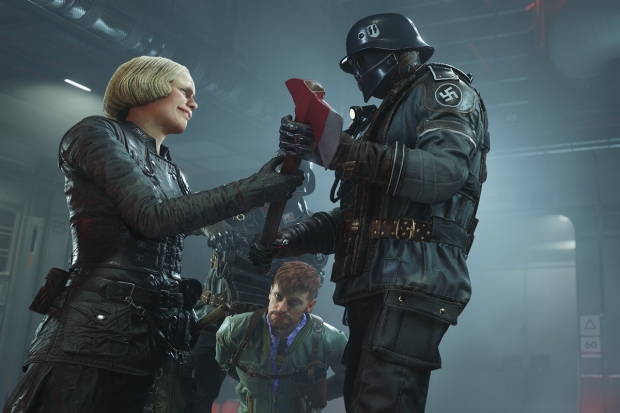 The white nationalist alt-right is furious that Wolfenstein II: The New Colossus depicts Nazis and the KKK as bad guys.

For those who came in late, Wolfenstein II: The New Colossus is a game about fighting Nazis who are helping to make America great again in an alternate 1961. New Colossus plays on themes of Aryan supremacy and eugenics associated with the Nazis. Nazi officers are seen walking casually with Klansman in the middle of a typical 1960s American town in the middle of a festival.

In comments on the trailer for the game and threads about it on 4chan and Reddit, alt-right users expressed anger over the portrayal of Nazis as villains, and one anti-Semitic commenter on the YouTube trailer claimed that “nationalism and heritage is bad” unless it comes to Jewish people.

The comments on the YouTube trailer are both sad and priceless. There are the offended white supremacists who think that the Nazis losing a war is unrealistic – because that never happened.

There are racists who are very upset about the fact that the game includes a black female character. Motherboard uncovered a commentary where a black character was a "black Afro whore" and suggested Jews were controlling the game industry.

While there will be those that those who think that it is “all a joke” or trolling and no one really thinks these sorts of things. But there seems to be some evidence to suggest otherwise. Particularly when they drag out old talking points like “what about communism?” which means they are serious – stupid but serious.

Then there are those who think that killing Nazis is a cool political statement that justifies liberal street cred, which lowers the bar of intellectual debate somewhat for the left.

The weird thing is that some tech magazines are thinking that such a thing is worth debating. A Tech Times headline actually asked a question “is Wolfenstein racist to white people?” as if such objections need to be rationally analysed. It did not reach any conclusion because ultimately the whole concept is pretty daft.