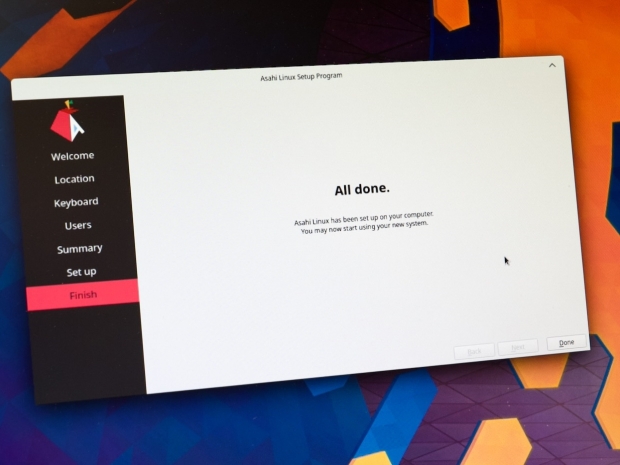 A small group of volunteers has worked to get Asahi Linux up and running on Apple Silicon Macs, by adapting existing drivers and (in the case of the GPU) painstakingly writing their own, and rescue the hardware from the Walled Garden.

Last week, the team released its first alpha installer to the general public and the software supports the new M1 Ultra in the Mac Studio.

In the current alpha most of the hardware works including Wi-Fi, USB 2.0 over the Thunderbolt ports (USB 3.0 only works on Macs with USB-A ports, but USB 3.0 over Thunderbolt is "coming soon"), and the built-in display.

The Tame Apple Press points out that there are important things which do not go including DisplayPort and Thunderbolt, the webcam, Bluetooth, sleep mode, GPU acceleration or a valid reason to exist.

The developers don't think the software will be "done," with all basic M1-series hardware and functionality supported and working out of the box, "for another year, maybe two."

Asahi only needs about 15GB, but the installer requires you to leave at least 38GB of free space to the macOS install so that macOS system updates don't break. From there, dual-booting should work similarly to the process on Intel Macs, with the alternate OS visible from within Startup Disk or the boot picker you can launch when your start your Mac. Future updates should be installable from within your new Asahi Linux installation and shouldn't require you to reinstall from scratch.

Last modified on 28 March 2022
Rate this item
(0 votes)
Tagged under
More in this category: « Russians bomb retro computer technology museum Apple bribes engineers to stay in the flying saucer »
back to top