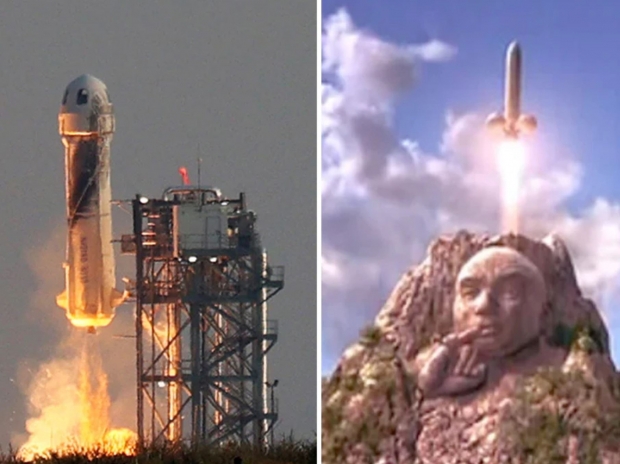 Yeah, should be doing a bit more about the environment

Former Amazon CEO Jeff Bezos, who became the first man to ride into space on a giant sex toy, has agreed that it probably was not a good use of his stonking wealth.

The flight of the penis-shaped rocket, complete with helmet, and painting of bulbous veins down the side, attracted some criticism on social media as a waste of cash which would probably have been better off spent paying tax.

In an interview with CNN ahead of his planned Tuesday morning space voyage in a rocket built by his company Blue Origin, Bezos was asked for his thoughts on critics who call the extraterrestrial flights "joyrides for the wealthy, and [who say] you should be spending your time and your money and energy trying to solve problems here on Earth".

"Well, I say they are largely right", said Bezos, who Bloomberg estimates is worth $206 billion. "We have to do both. We have lots of problems here on Earth and we have to work on those."

Facebook posts are divided with lots of, mostly poor American, posters praising Bezos for spending all that money and being an inspiration for them as they struggle to pay for their health insurance. They just said people who complained were just jealous.

Then there were saner voices from more civilised countries which stopped tugging their forelocks at gentry and the very rich last century and pointed out that this was hardly a small step for humanity, given that communists managed it in the 1960s.

The 57 year old Bezos, who earlier this month stepped down as CEO of Amazon, said it's important to "look to the future... as a species and as a civilization".

In his view, the work being done today will lay the foundation for future generations to work in space, which "will solve problems here on Earth".

In an opinion piece for MSNBC, Talia Lavin views billionaires going to space through a more incendiary lens, writing: "What they seek to leave behind is a planet burning and flooding and full of the kind of small and ordinary suffering such fortunes could alleviate in an instant."

The space programme of the 1960s, which resulted in the first crewed mission to land on the Moon, "may have been mired in the bitter and petty rivalries of the Cold War, and limned by prejudice about who could excel", wrote Lavin, "but it was a project funded and created by our government, an achievement held in common by the masses. No such common pride can be held in the launch of the titans of capital."

"In this billionaire battle, there is no pretense at a sense of collective pride or communal achievement. Even the drumbeat of nationalism would be better than this obscene egotism, whose fumes are more putrid than rocket-jet emissions. It feels like a parody of hubris, and a colossal celebration of the social failure to moderate preposterous accumulations of wealth."

Last modified on 21 July 2021
Rate this item
(2 votes)
Tagged under
More in this category: « Bitcoin continues to crash Ancient driver bug could hit Windows machines »
back to top