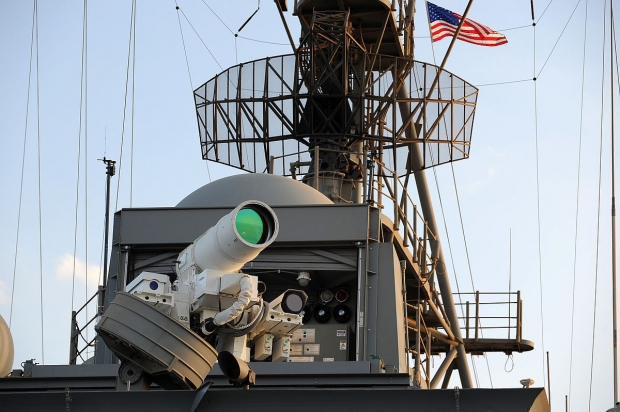 The US navy has deployed its first operational laser weapon, only this time it is not attaching them to sharks.

The Laser Weapons System (Laws), is not science fiction or experimental. It is deployed on board the unfortunately named USS Ponce amphibious transport ship.

It can be used to zap targets today and every day by Capt. Christopher Wells and his crew and it only  costs "about a dollar a shot" to fire.  So it might be risky to be a seagull in the Persian Gulf at the moment. After all frying seabirds at a distance is a pretty good test of the gear.

Laws has the advantage it can hit things at the he speed of light which makes it difficult to duck. This is 50,000 times the speed of an incoming ICBM. For the test, the USS Ponce crew launched the target -- a drone, a weapon in increasing use by Iran, North Korea, China, Russia and other adversaries. In an instant, the drone's wing lit up, heated to a temperature of thousands of degrees, lethally damaging the aircraft and sending it hurtling down to the sea.

It operates in an invisible part of the electromagnetic spectrum so you don't see the beam, it doesn't make any sound, it's completely silent and it's incredibly effective at what it does.

Last modified on 20 July 2017
Rate this item
(0 votes)
Tagged under
More in this category: « Boffins claim AI can spot fake news Microsoft moves US jobs to China »
back to top