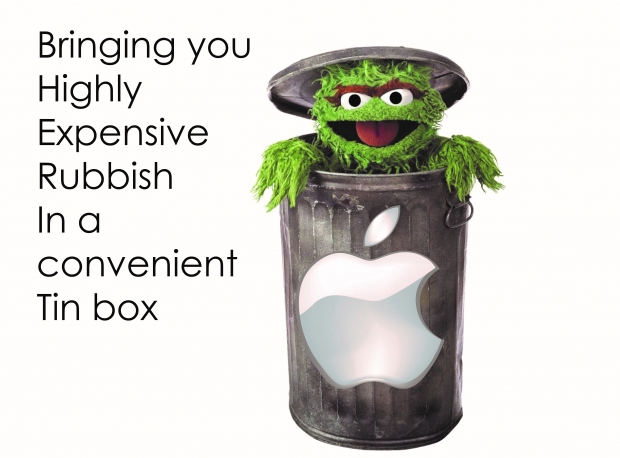 Even the Tame Apple Press is wading in

The fruity cargo-cult Apple really has dropped the ball on its PC hardware line with even its loyal Apple Press saying the outfit is in trouble.

Fox News, which normally chants Apple mantras with the rest of them claimed Apple was the focus of a mini firestorm which is about as scathing as the Tame Apple Press gets.

At the centre of the problem is Apple’s aging Mac Pro desktop line which was due for a refresh to bring the rubbish bin PC into the internet age. You would think after not improving a computer for a since 2013 you could add a few improvements.
Apple decided that the best thing to do was jack up the price – after all you get what you pay for right?

Even MacWorld thought that Apple was taking the Nintendo.

But there's nothing new about what Apple did. "The two available Mac Pro configurations aren’t new, they’re just newly priced," MacWorld pointed out.

Apple marketing VP Phil Schiller reportedly said that the Mac Pro had heat (aka “thermal”) issues that “restricted” a user’s ability to upgrade and that Apple is “sorry to disappoint customers”.

Apparently Apple had a meeting where it was claimed that Apple said it is “completely rethinking” the Mac Pro model. And, as a result, the company acknowledged "that its flashy 2013 Mac Pro redesign was a mistake”.

It has apparently taken them four years at least to have worked that out, and even longer before Apple comes up with a solution. In fact the overhaul will not happen this year.

9to5Mac insists that Apple is trying to assuage any perceived user frustration, and this is the closest thing that Jobs Mob has got to an apology.

“The very fact that Apple felt compelled to hold [Monday's] meeting in the first place is evidence of just how much it thinks it screwed-up here. The company that has always taken the view that ‘people don’t know what they want until you show it to them’ has clearly had to face the fact that, in the pro market at least, that’s not the case.”

Last modified on 06 April 2017
Rate this item
(0 votes)
Tagged under
More in this category: « TSMC’s 12-inch plant on schedule YouTube will not pay creators without reaching 10,000 views »
back to top