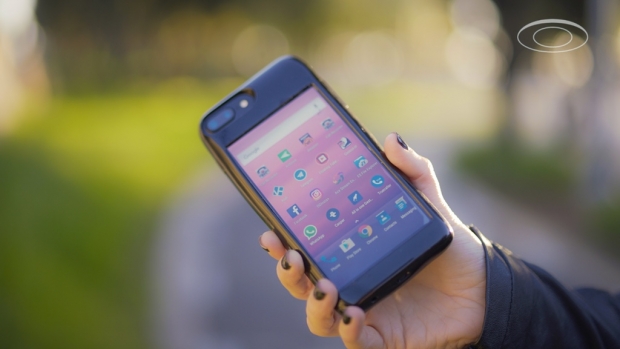 A new Kickstarter campaign aims to “expand the iPhone's functionality” by giving it a fully functional Android case.

The "Eye Smart iPhone Case" features a fully functional Android device built into the case itself. The campaign was launched on March 1 and has already raised over $100,000.

The always-on 5-inch AMOLED display is built into the case, which runs the Android 7.1 Nougat operating system.

The case connects to the iPhone using its Lightning port to enable file transfers, power delivery, and more. A microSD card slot provides up to 256GB of storage for holding photos, videos, and other media, all of which is accessible using the Android file explorer.

A built-in 2,800 mAh battery provides additional charge to the iPhone, and the Eye case itself supports Qi wireless charging. Two SIM card slots are included, and higher-end models support 4G LTE connectivity, so up to three phone numbers can be used with an iPhone. Android exclusive features, like native call recording, the file explorer, customization, file transfers, and Android apps are all made available to iPhone users via the Eye case.

It provides iPhone users with the missing headphone jack which Apple bravely took away from them so they can use proper headphones to listen to their Coldplay collections.

The Eye case includes NFC, an IR blaster and receiver for controlling TVs and other devices, and a car mount. It's available for the iPhone 6 and later, and will allegedly be available for the new wave of iPhones coming in 2017 within a month of their release.

The Smart iPhone Case is available for a Super early bird pledge of $95, with prices going up for 4G connectivity. The estimated retail price is between $189 and $229.

All this means that Apple fanboys can run a proper phone while fulfilling their misguided religious obligations to the fruity tax-dodging cargo cult.

Of course, a sensible person would simple buy an Android phone in the first place and save a fortune, but “sensible” is not Apple’s target market and the terminally stupid always need help.