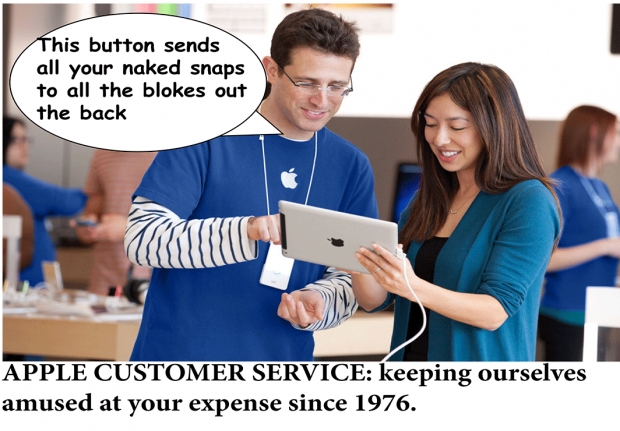 Since part of the joy of owning an iPhone involves having to take it to an Apple store to be repaired, you will be relieved to know that Apple genii down under have been providing an extra special service to clients whose phone’s they repair.

The Courier-Mail has discovered that multiple employees from an Apple Store in Brisbane have been stealing customers' photos from their phones, or secretly taking photos of them in a bizzare sex game to "rank their bodies".

The Australian Privacy Commissioner is now looking into the alleged covert photo-sharing ring even while Apple insists that the story is completely untrue. It told the The Guardian that it has seen "no evidence that customer data or photos were inappropriately transferred or that anyone was photographed by its employees".

However, it has confirmed that "several employees" have been fired, and that the company is investigating a "violation of Apple’s business conduct policy".

According to the Courier-Mail's initial report, staff at the Carindale store were allegedly stealing photos from customers' phones without their knowledge and snapping shots of female customers and staff. "More than 100 close-up and explicit photos" were apparently taken.

Employees then allegedly traded them among themselves. "One person would take a photo and add it to the chat and others would give the person or their butt or their boobs a rating out of 10 and they would add their own side commentary."

It all was discovered after an Apple employee found a technician using a customer's phone in the repair room. We assume he was transferring photos. So far four employees, all male, have been fired for what Apple calls a "violation of Apple’s business conduct policy” rather than pervs sexually violating its customers.

In a statement, Apple told The Courier-Mail: "Apple believes in treating everyone equally and with respect, and we do not ­tolerate behaviour that goes against our values. We are investigating a ­violation of Apple’s business conduct policy at our store in Carindale, where several employees have already been terminated as a result of our findings."

The Australian Privacy Commissioner, Timothy Pilgrim, said (via the BBC): "We are aware of the reports and will be making enquiries with Apple to seek further information ... This is an important reminder that all organisations that collect and manage personal information need to embed a culture of privacy and ensure employees understand their responsibilities."

That might be a bit of a problem, if Apple is denying everything and refusing to admit what its staff were doing. Makes deciding to use your Samsung refund money to buy an iPhone 7 look like an even more stupid idea than it ordinarily would be.

Last modified on 13 October 2016
Rate this item
(11 votes)
Tagged under
More in this category: « HP releases Kaby Lake notebooks Royal Navy puts robots through their paces »
back to top