“Jesus” thrown out of Apple Store and arrested 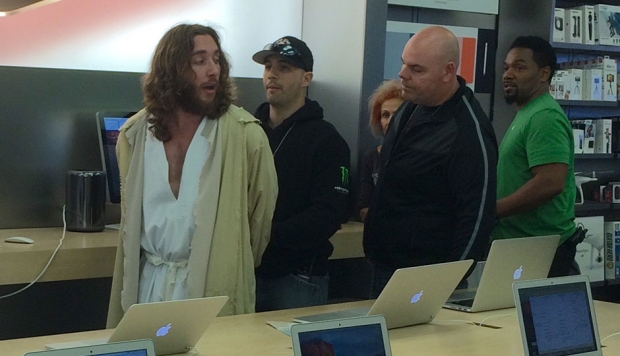 A bloke who is known as the “Philly Jesus” was arrested for disorderly conduct after refusing to leave an Apple Store in Philadelphia.

According to the local paper Jesus AKA Michael Grant has been a common sight on the streets of the city for the past two years, with his flowing robes, long hair, a beard and carrying a cross. He is not exactly a comedy side show either, the former Heroin addict takes his job rather seriously and spends most of his time preaching a mixture of paranoid conspiracy theories and right-wing conservative Christianity.

It was only a matter of time before he bought his roadshow to the holiest of holies of the Apple cult. Christianity deals with other religions in much the same way that Apple deals with rival companies – steals their best ideas, claims to have invented them and then rubbishes them completely.

The Apple Genii did not mind that Grant/Jesus showed up at the store – after all crazy is part of the target market. But what annoyed the Apple staff was Jesus’s Cross, not so much the iconography, or the fact it was not a rounded rectangle, but because it got in the way.

Genii complained it was blocking the aisle and obstructing customers. Grant had gone into the store to read his emails. Jesus/Grant was asked to take the cross outside of the store and was asked to leave when he refused to do so. In fact he we was asked three times and denied three times. No word on whether a cock crowed.

Jesus claimed that lugging a huge woodern cross around with him was part of his rights of religion, much in the same way that lugging a large expensive smartphone is part of the Apple religion.

In the end the coppers were called. No one had their ear cut off and Jesus was taken to a cell. He was not given 39 lashes and may have been given a nice cup of tea to help calm him down. He has since been charged with defiant trespass and disorderly conduct. The last time Jesus carried out disorderly conduct it was throwing out money changers from the temple. This time it looks like the money-changers got the better of him in this round.

Last modified on 03 May 2016
Rate this item
(25 votes)
Tagged under
More in this category: « MediaTek expects profits to rise Police can demand fingerprint phone unlocking, but not passcodes »
back to top