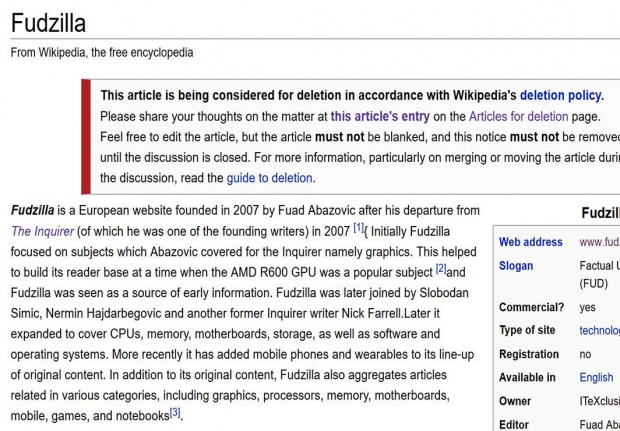 Apparently can't find us on Google

Wikipedia editors are trying to delete the modest Fudzilla entry on the basis that it is not famous enough or has enough links on Google.

This is the second time that Wikipedia has attempted to wipe Fudzilla from its pages. The last time was in 2009. At the time we did not have the number of hits, or the industry connections that we do now so we let it slide.

Then on our ninth birthday we thought “we have been around long enough... lots of magazines recognise us so we will have another crack at it.” It was written by an outsider who only wrote a paragraph and we had links to show it was all true so we thought it would be ok.

It had only been up for a couple of hours when a Wikipedia editor called Dennis Brown said that the entry failed to pass WP:GNG. Apparently this person did some searching and could not find Fudzilla “of any use.”

“Not a comment on the site itself, but it hasn't generated enough coverage in independent, reliable sources to pass the criteria for inclusion,” Brown said.

This is jolly odd that Google took 0.54 seconds to find 338,000 results. Fudzilla has written 40,000 news stories in its nine years and has been linked by shedloads of different magazines.

For the record Wackypedia does allow a big entry from Daily Tech, the Inquirer (after the original team left) and several other technology magazines which are on a par with us.  Meanwhile to make its case some Wackpedia editors have gone through Fudzilla references on the site and marked them "rumour site find an alternative source."   It is fairly clear that Fudzilla has angered someone on the wackypedia editorial team.

The deletion is still up for debate so if Fudzilla fans would like to tell Wikipedia to sling its hook here is the link.