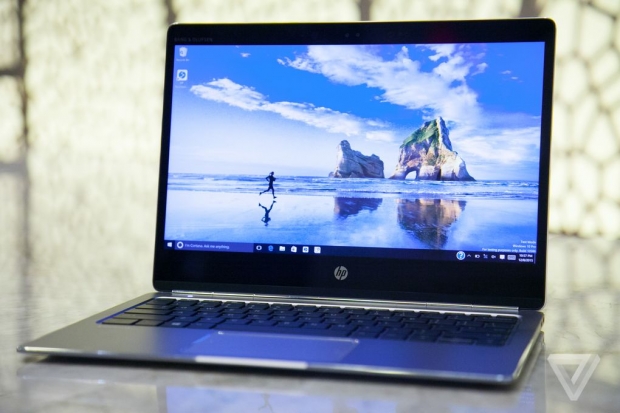 Oh the shame of it. Even a printer ink maker can do better

The maker of expensive printer ink, HP has out designed Apple and created a much thinner notebook that Sir Jonny Ive could.

For years Apple has been “king of the thin” producing ever more anorexic designs, for ever more dollars. But now it appears that task was not as difficult as the Tame Apple Press claimed, and even HP can do it.

HP’s EliteBook Folio will be in the shops for $999 in March and will be $300 less than Apple's status symbol and will co-operate better with business networks because it runs Windows.

HP EliteBook Folio Piano HingeMeasuring 11.5 x 8.2 x 0.47 inches for the non-touch model and 0.49 inches thick for the touch version and weighing less than 2.2 pounds.
It’s slim body is made from CNC-machined aluminium. Jobs mob’s MacBook weighs more and is fatter at its thickest point (0.14 to 0.52 inches).

Unlike the MacBook, the EliteBook Folio sports a 180-degree piano hinge, which could come in handy for giving presentations for collaborating. HP’s effort also has Bang & Olufsen speakers which give a better sound quality than the Apple equivalent.

The screen can be a UHD screen (3840 x 2160 pixels). The MacBook has a disappointing lower-res 2304 x 1440-pixel panel. The Folio can have a similar screen in touch or non-touch if you want a better battery life.

The EliteBook Folio has two USB-C ports and an audio jack. It is still better than the one more USB-C port of the MacBook. HP has an optional Thunderbolt 3 dock for when you need more connectivity options, as well as various USB-C adapters for Ethernet, VGA and HDMI.

HP is offering a wide range of configuration options, including your choice of 6th-generation Core m5 and Core m7 processors, 8GB of RAM and 128GB, 240GB or 256GB SSDs. The average battery life is 10 hours.

Still Steve Jobs must be spinning in his gave to be outclassed by someone as historically pedestrian and reliable as HP.

More in this category: « Apple shares continue to tank Nvidia keynote focuses on autonomous cars powered by Deep Learning »
back to top