Bring your own canary

It’s relatively quiet on the motherboard front, as most vendors launched their latest generation of Socket 1150 and FM2+ boards months ago. Therefore ASRock got creative and came up with two new motherboards designed specifically for Bitcoin mining.

The H81 Pro BTC is an Intel Socket 1150 motherboard capable of handling 4th generation Intel Core chips, or Haswell processors to be precise. The H61 Pro BTC! is based on the old H61 chipset and it supports second and third generation Core processors (LGA 1155.

So what exactly makes them unique compared to dozens of H81 and H61 motherboards out there?

Well, they feature one PCIe 3.0 x16 slot along with five PCIe 2.0 x1 slots, allowing users to install up to six graphics cards for some parallel number crunching. They also feature two additional 4-pin power connectors to provide the necessary juice.

This are obviously niche products and they are more or less pointless unless you are into Bitcoin mining or something even more exotic. 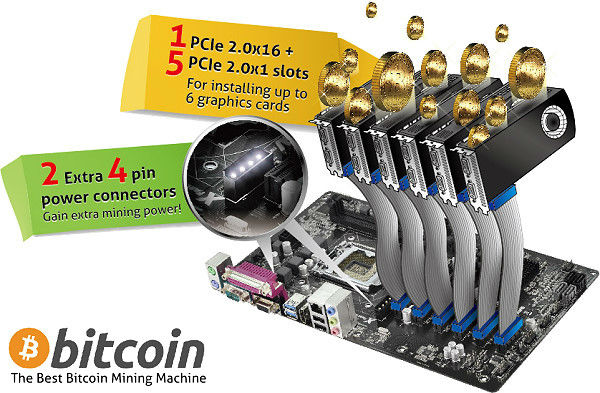 Rate this item
(0 votes)
Tagged under
More in this category: « Gigabyte has a killer FM2+ ITX board MSI teasing two new mini-ITX Gaming Series products »
back to top