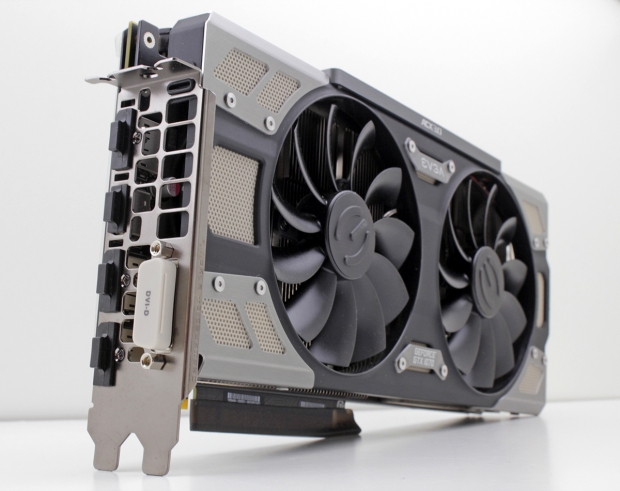 The shroud of ACX 3.0 cooler is made of many small parts.

And it is 'Desiged by EVGA'. 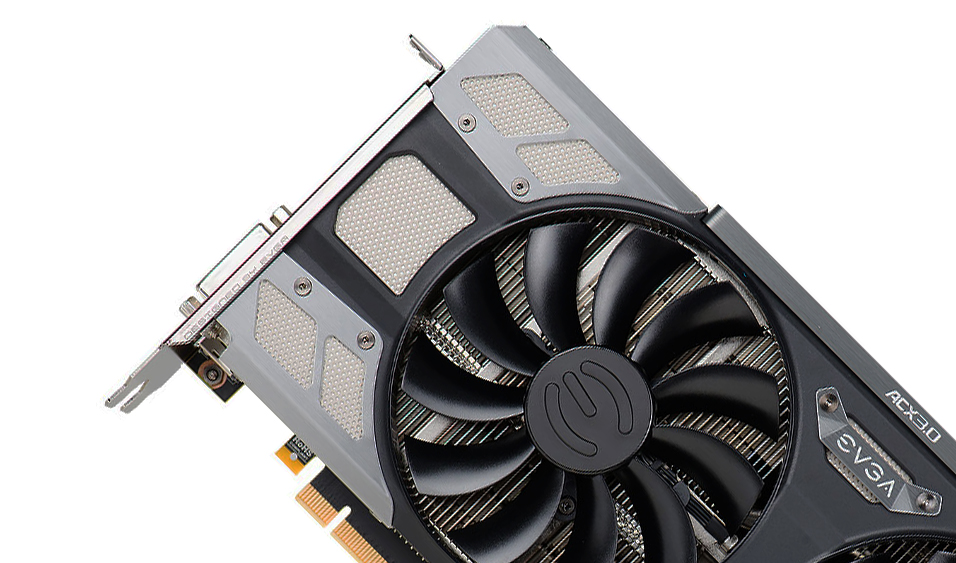 The shroud (black part of it) is made of quality looking plastic with brushed aluminium trimmings. It has to be plastic or it would be too heavy. It is open on all sides and the openings serve as exhaust vents. 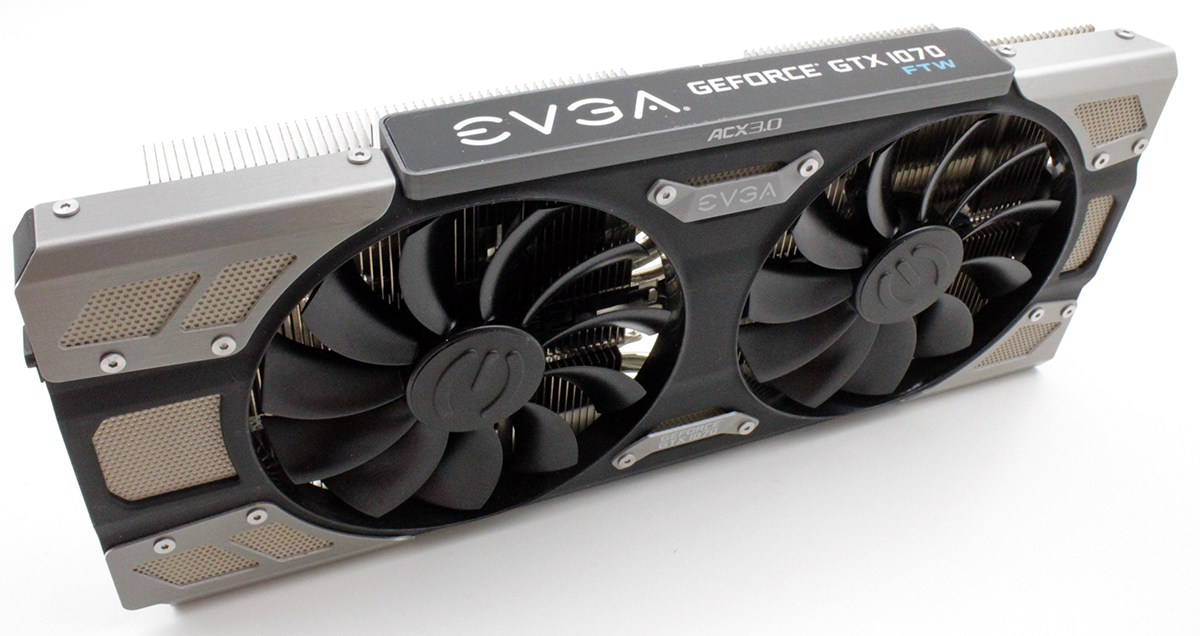 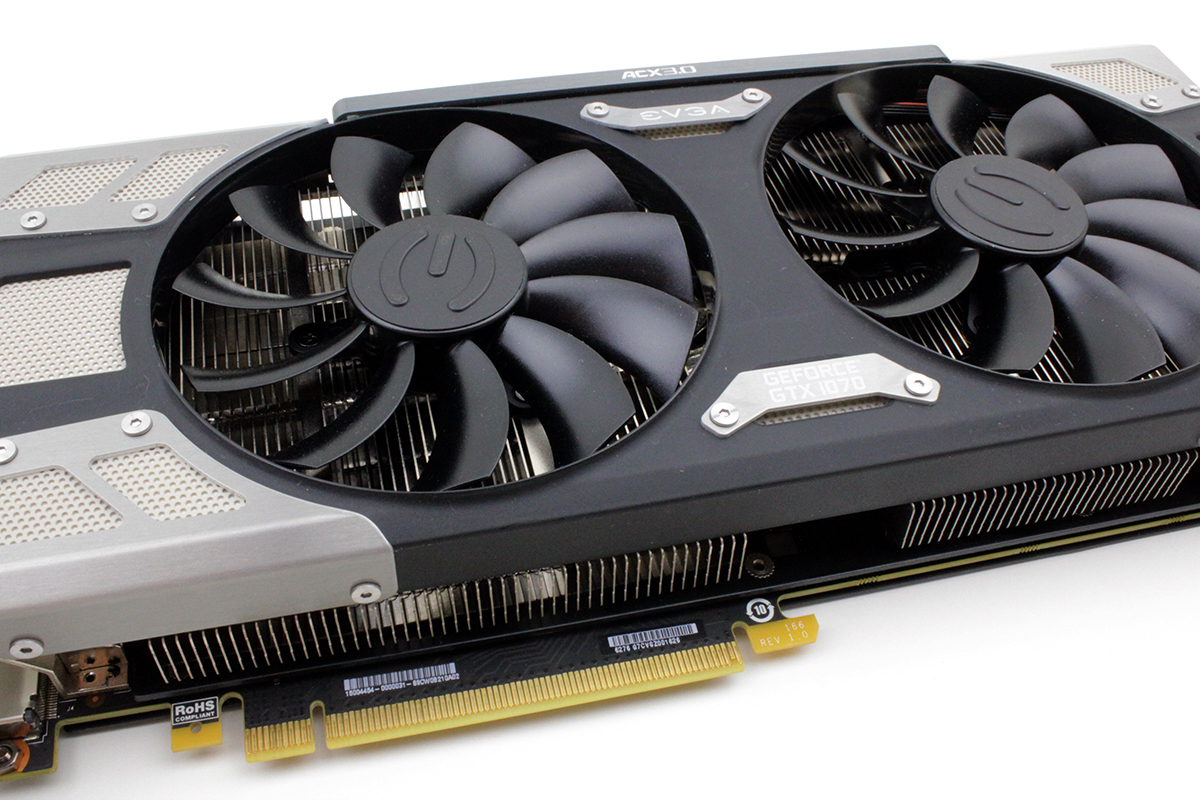 A backplate has become standard for the EVGA's high end graphics cards. It is not that important for the cooling but the backplate adds much to the card's overall image and this one looks particularly nice. A backplate is an important part of the ACX 3.0 cooler since it helps reinforce the PCB. 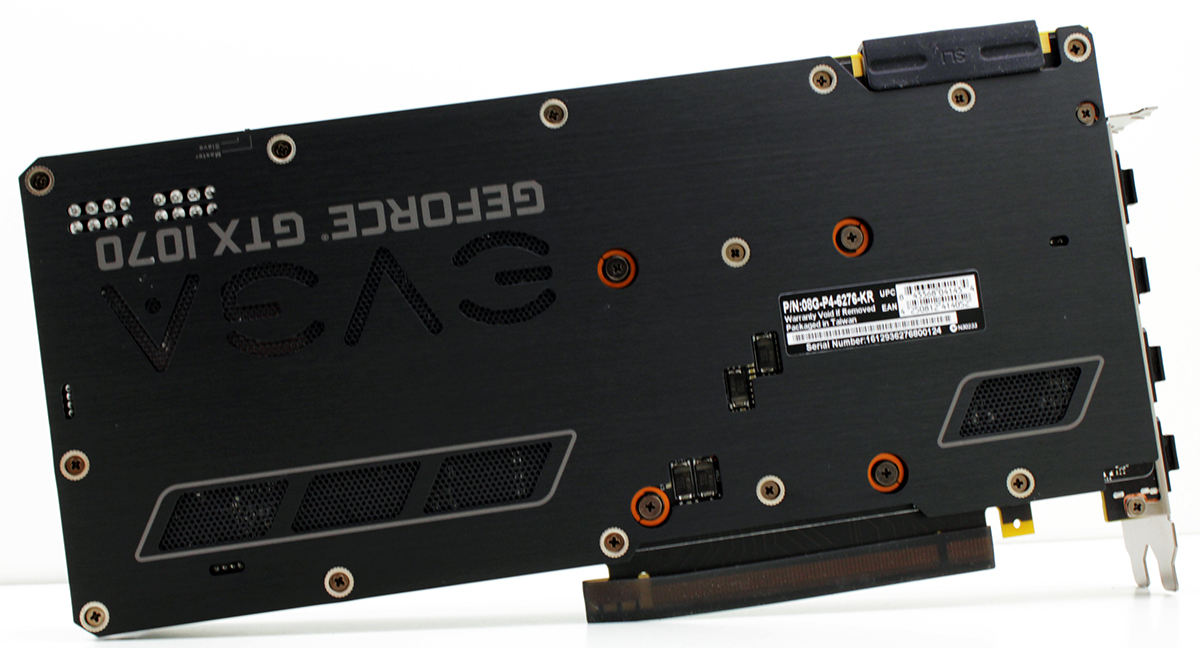 While the GTX 1070 Founders Edition has a TDP of 150 watts, the GTX 1080 Founders Edition has a 180 TDP. Both use a single 8-pin connection. Maximum total graphics power for the GTX 1070 FTW is 215W and for the GTX 1080 FTW is 258W. Both EVGA cards use a pair of 8-pin connectors (each up to 150W). This means the GTX 1070 FTW card would be good with one 8-pin power connector, but EVGA decided that a dual 8-pin setup is better for feeding the 10 phase power and providing the core with clean filtered power. More phases means less heat per phase, and since we get more stable power delivery this should provide better overclocking. When ti comes to overclocking your GPU’s maximum speed always depends on how lucky you get in the GPU lottery. 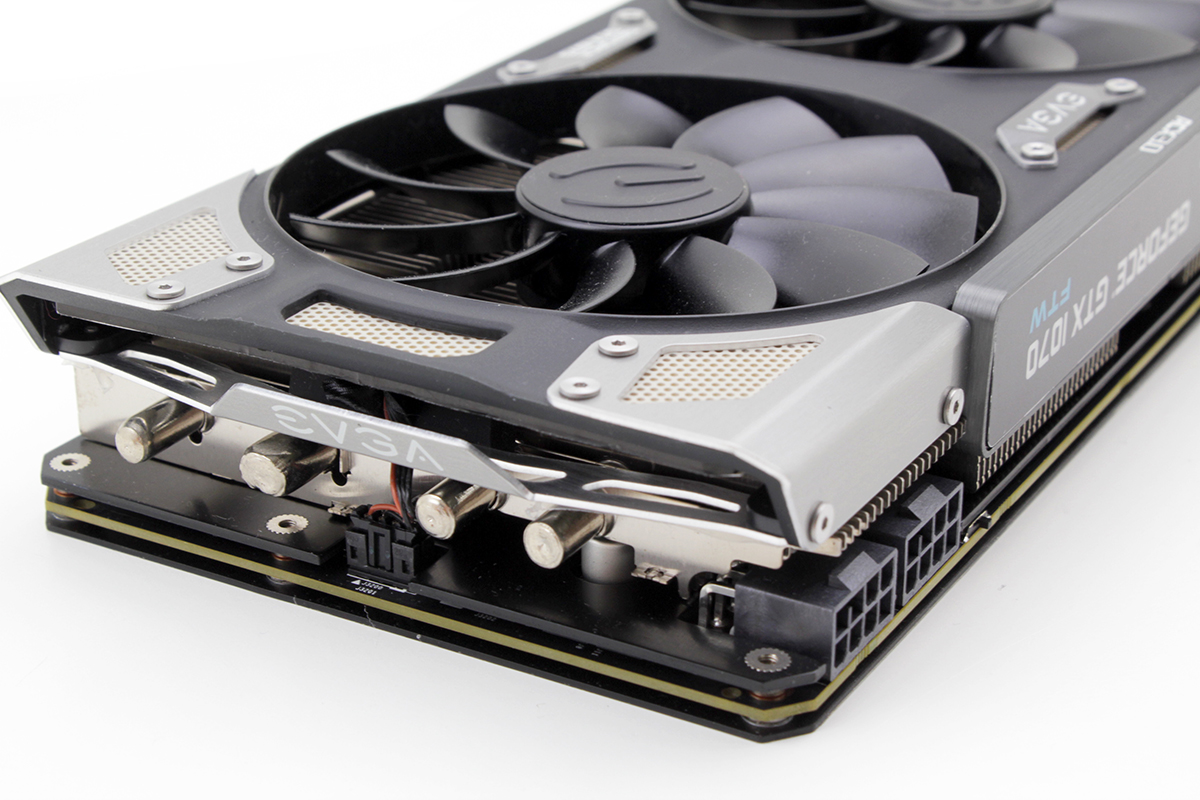 This card is meant for overclocking and QSD (Quick Switch Dual BIOS) allows you to switch to the secondary BIOS with the flick of a switch. The BIOS switch is located close to the PCI power connector. Be aware that changing the bios does void the warranty, but since the card has a pair of BIOS chips, you can safely modify/flash the slave(secondary) without doing this. 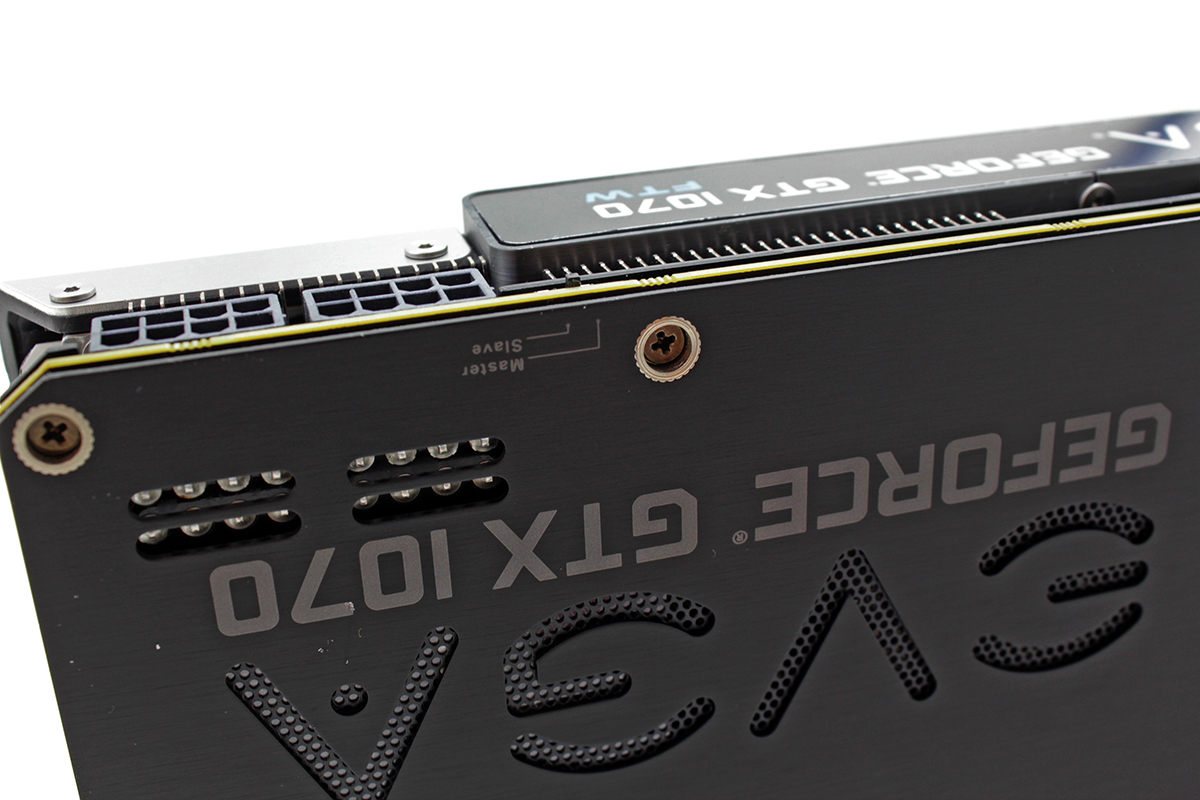 The whole cooler is held  by only four screws in vicinity of the GPU, but there are no vibrations or signs of instability. 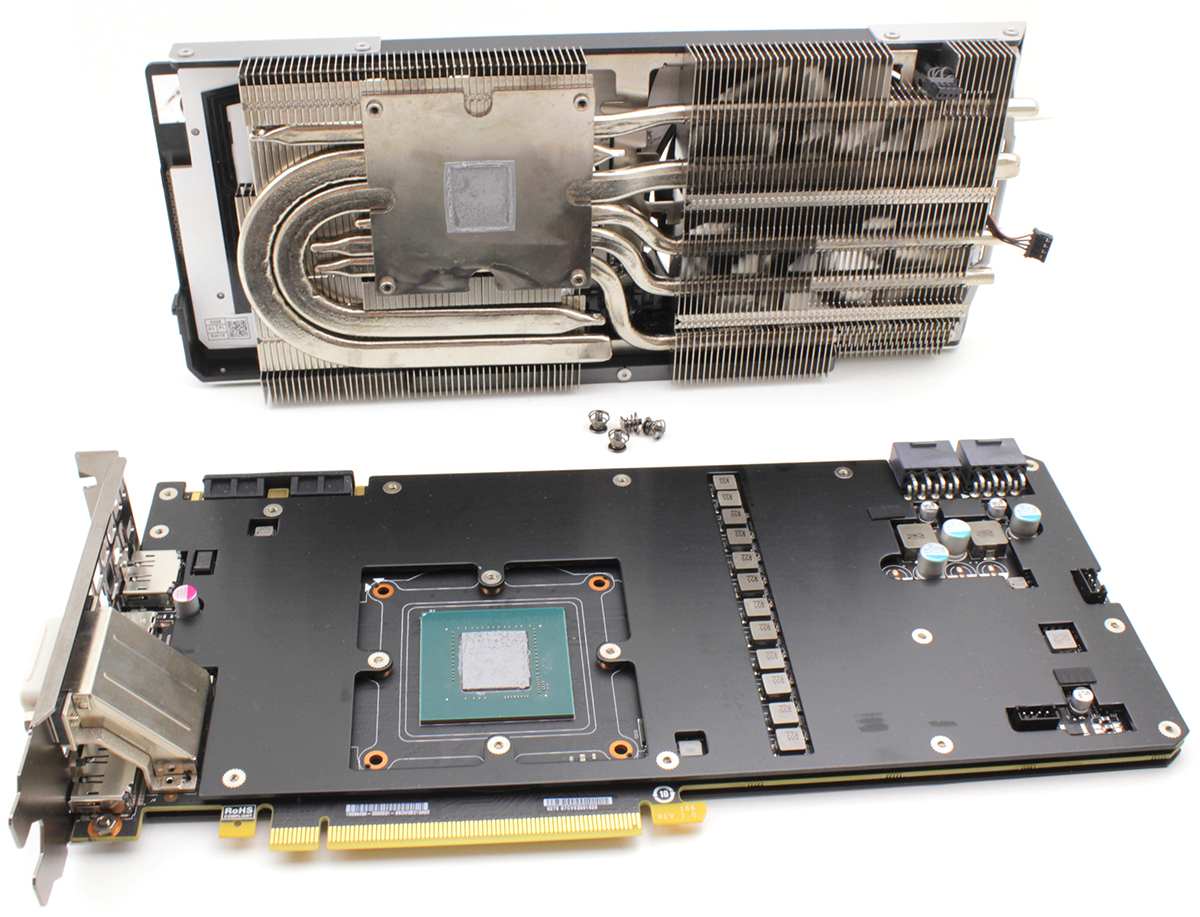 EVGA designed Straight Heat Pipes 3.0 (but as you can see it is not all that straight) and increased copper contacts reduce the GPU temperature by 10 per cent, compared to Straight Heat Pipes 2.0 used on the ACX 2.0 cooler. A big copper base covers the small GP104 GPU.

We always advise users to clean the heatsink regularly. It’s good for the card and it also helps keep fan RPMs as low as possible, but cleaning the heatsink can become cumbersome on some cards, as it is a case with the GTX 1080 FTW ACX 3.0. EVGA designed a special heatsink with lots of dissipation surfaces, but you cannot remove the shroud from the heatsink easily. However it is not hard to remove the fans, and  clean the heatsink below the fans at least annually. 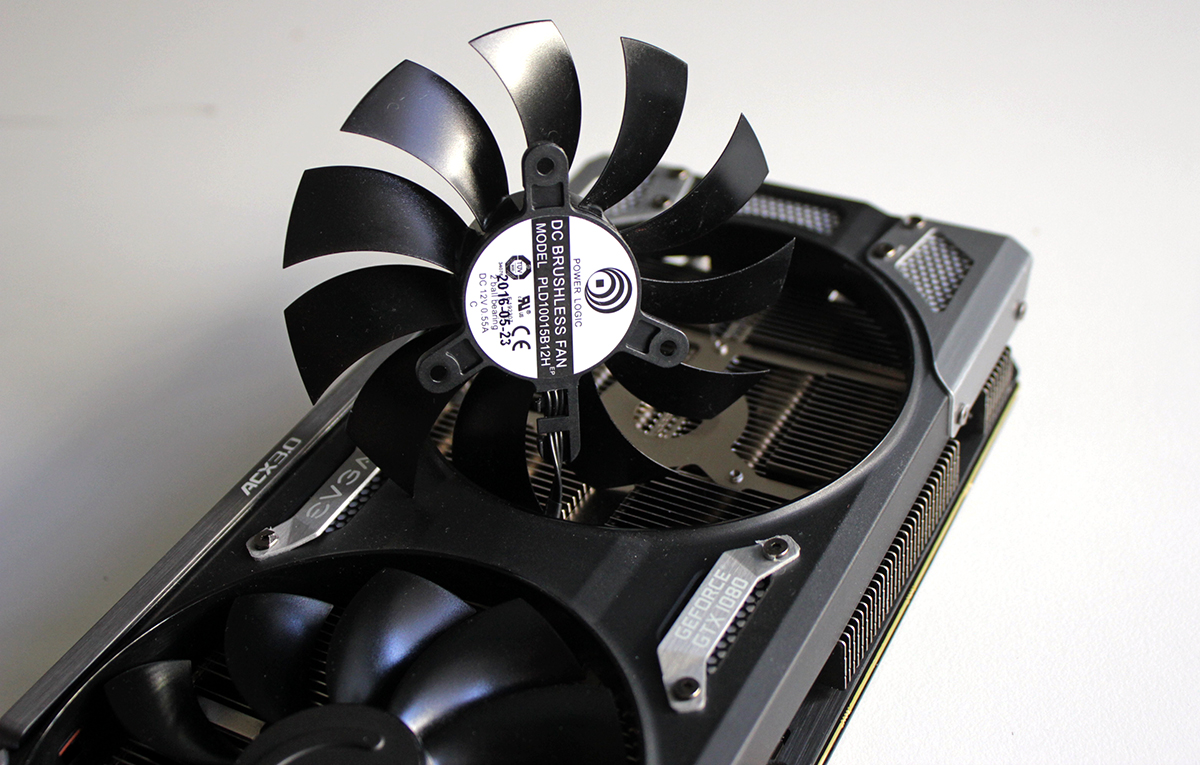 The Power Logic PLD10015B12H fan has some good features. First of all it was chosen due to its dense, curved blade design and double ball bearing design. A poor blade design generates more noise but, this particular 11-blade fan seems to be up to the job. The noise generated by ball bearing designs tends to be low, at least while they are new. Since this fan uses two ball bearings it should last a bit longer and generate a less noise even after a couple of years of wear.

The reference Geforce GTX 1080/ GTX 1070 has three DisplayPorts (DisplayPort 1.4), a single HDMI (HDMI 2.0b) and single DVI display outputs. The EVGA GTX 1070 FTW card has the same configuration of video outputs. Four video outs can be used at the same time. Since DVI connector lacks analogue wiring there is no support for D-sub monitors through dongles. After we become acquainted with Adaptive V-Sync which was introduced with Kepler, and with G-SYNC introduced with Maxwell, now is the time to learn about Fast Sync. This display sync option combines good and bad sides of the two V-Sync modes. Fast Sync provides low-latency but at the same time it eliminates frame-tearing. 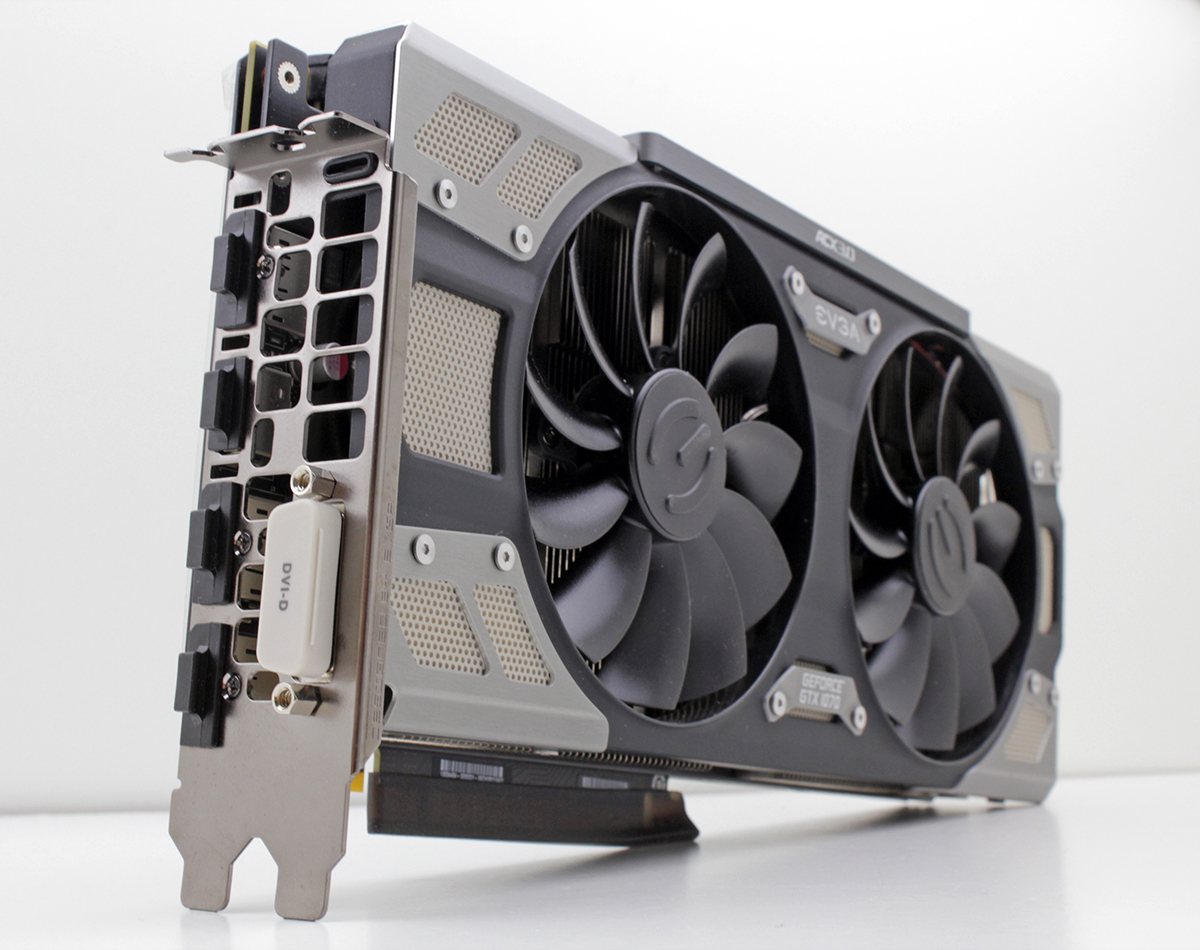 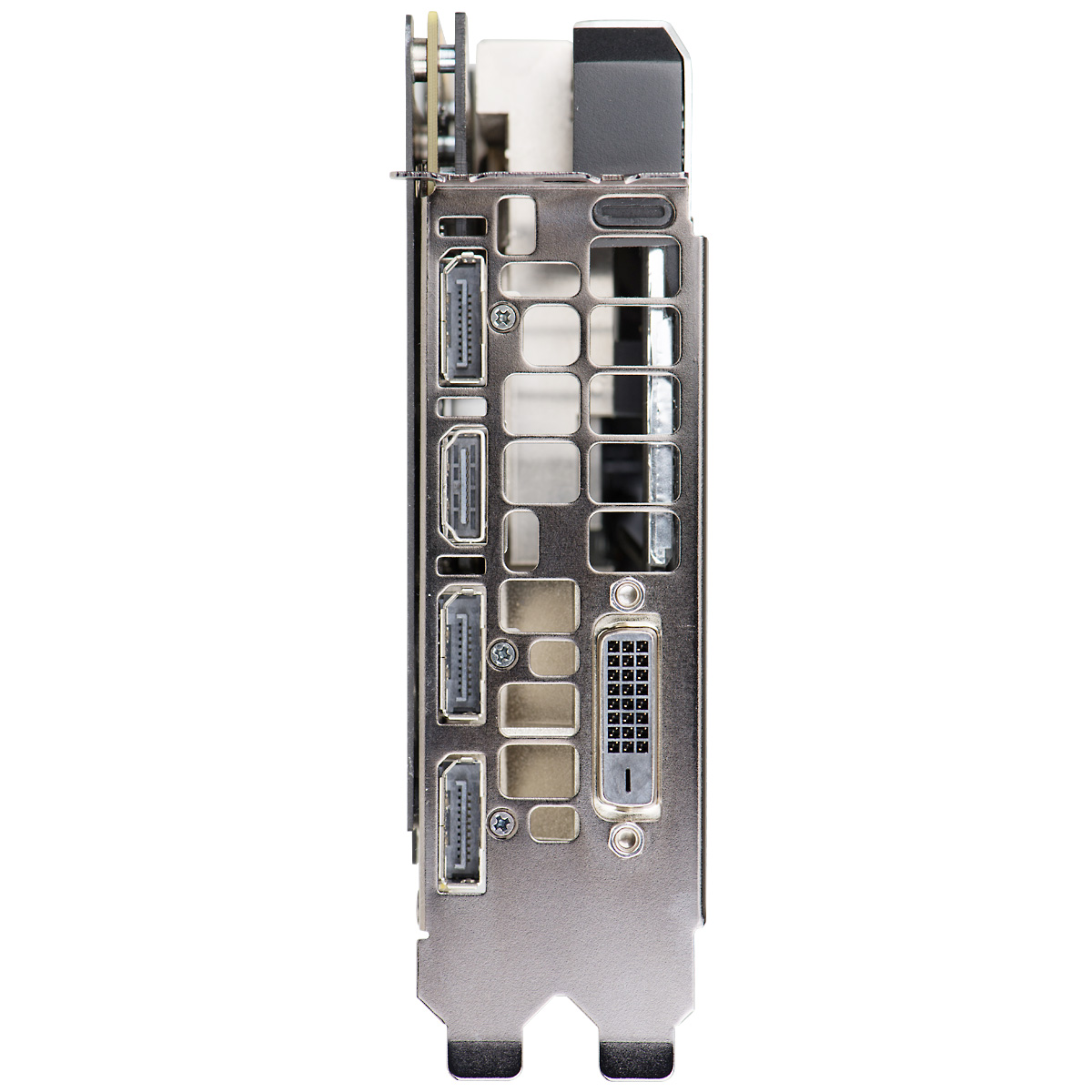 The GTX 1070 FTW is ready for multi-GPU action, but officially supports ony standard two-card SLI setup. This is so that it can provide more bandwith at 4K at 60 Hz and above. To support this, Nvidia developed an advanced high-bandwidth SLI bridges called "SLI HB" which needs both SLI connectors in 2-way SLI mode. 3-way and 4-way SLI are still possible using a special software key from NVIDIA (while support in future games depends on the game/benchmark developers). 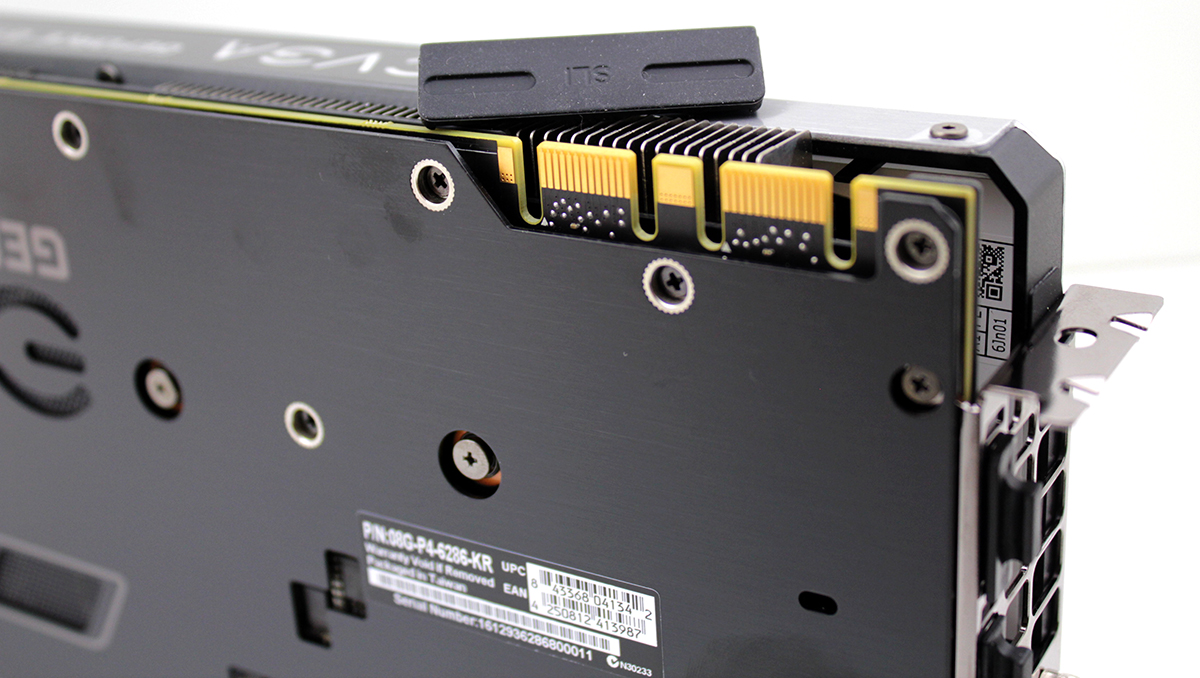 « Prev Next »
Last modified on 31 August 2016
Rate this item
(25 votes)
Tagged under
More in this category: « Nvidia Geforce GTX 1060 previewed Xiaomi Mi5 lives up to flagship expectations »
back to top