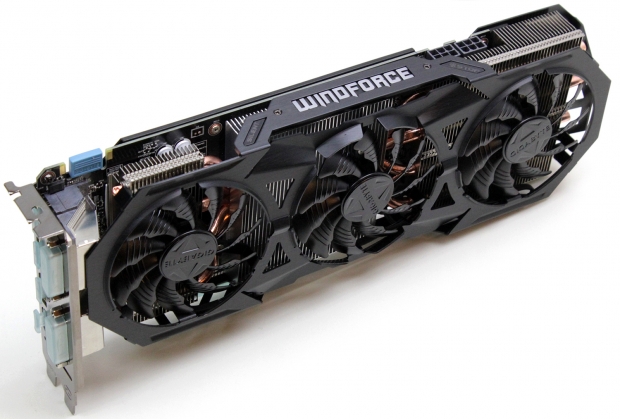 Review: Silence all the time and decent gaming performance

Gigabyte’s GTX 960 G1 Gaming is one of the best, if not the best GTX 960 graphics card on the market, although it does not shine in terms of value.

Today we’ll be taking a closer look at the recently introduced Gigabyte GTX 960 G1 Gaming graphics card (GV-N960G1 GAMING-2GD) with the company’s trademark Windforce triple-fan cooler. This is Nvidia’s first mainstream graphics card based on the new and extremely power-efficient Maxwell architecture.The GTX 960 graphics card is based on brand new silicon codenamed GM206. You can think about the GTX 960 as a replacement for outgoing GTX 660 and GTX 760 cards.

Nvidia launched the Geforce GTX 960 describing it as a “sweet spot” graphics card. Traditionally Nvidia’s “sweet spot” cards are 60-series models such as the GTX 460, 560, 660, 760 and so on. They tend to offer a good price/performance ratio and the current generation can run most titles at 1080p with high detail settings. The suggested MSRP for the GTX 960 is 200€.

The G1 Gaming card looks more like a high-end graphics card, and we really like the design. 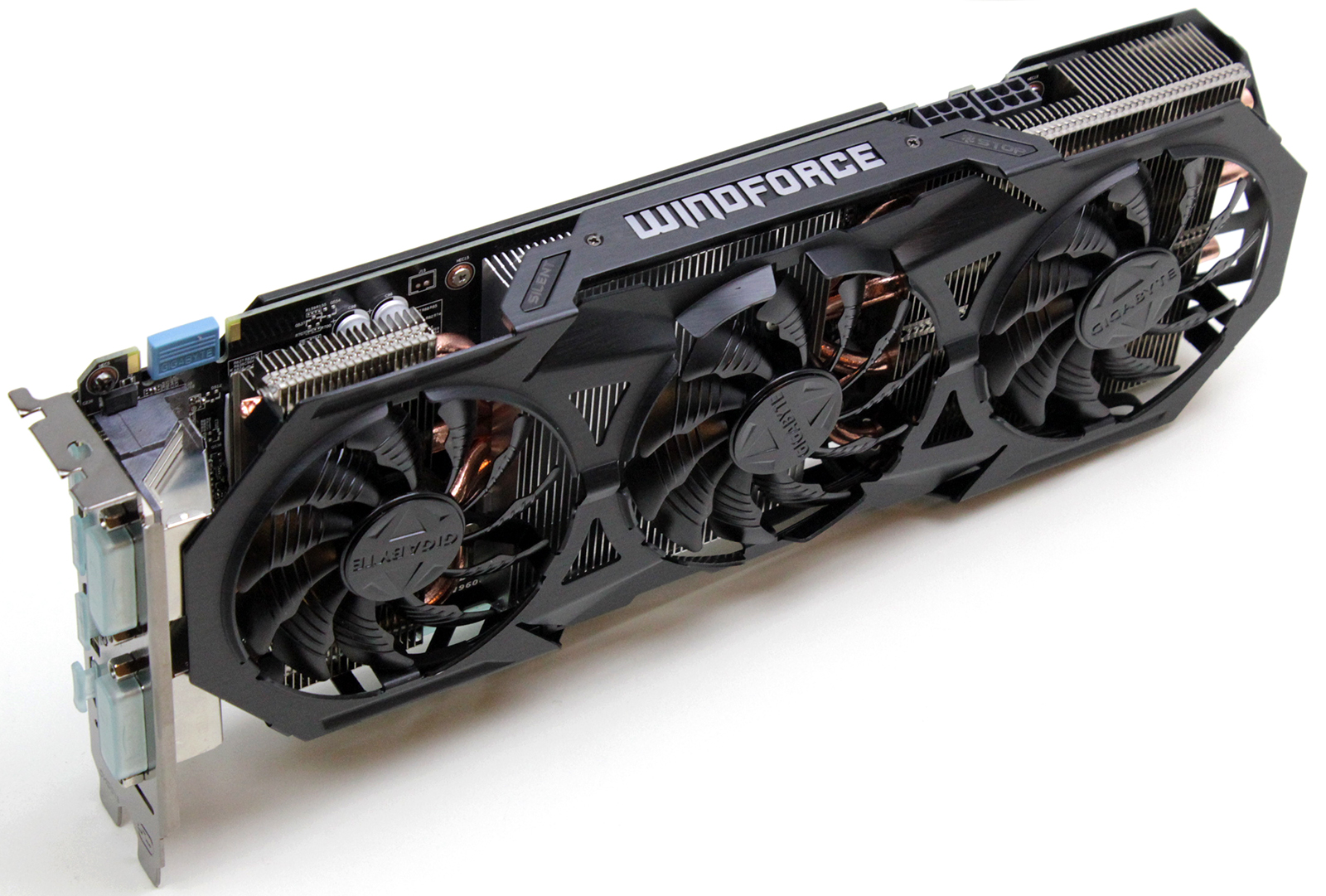 The metal frame looks really nice and the backplate adds much to the good overall image of the G1 Gaming card. 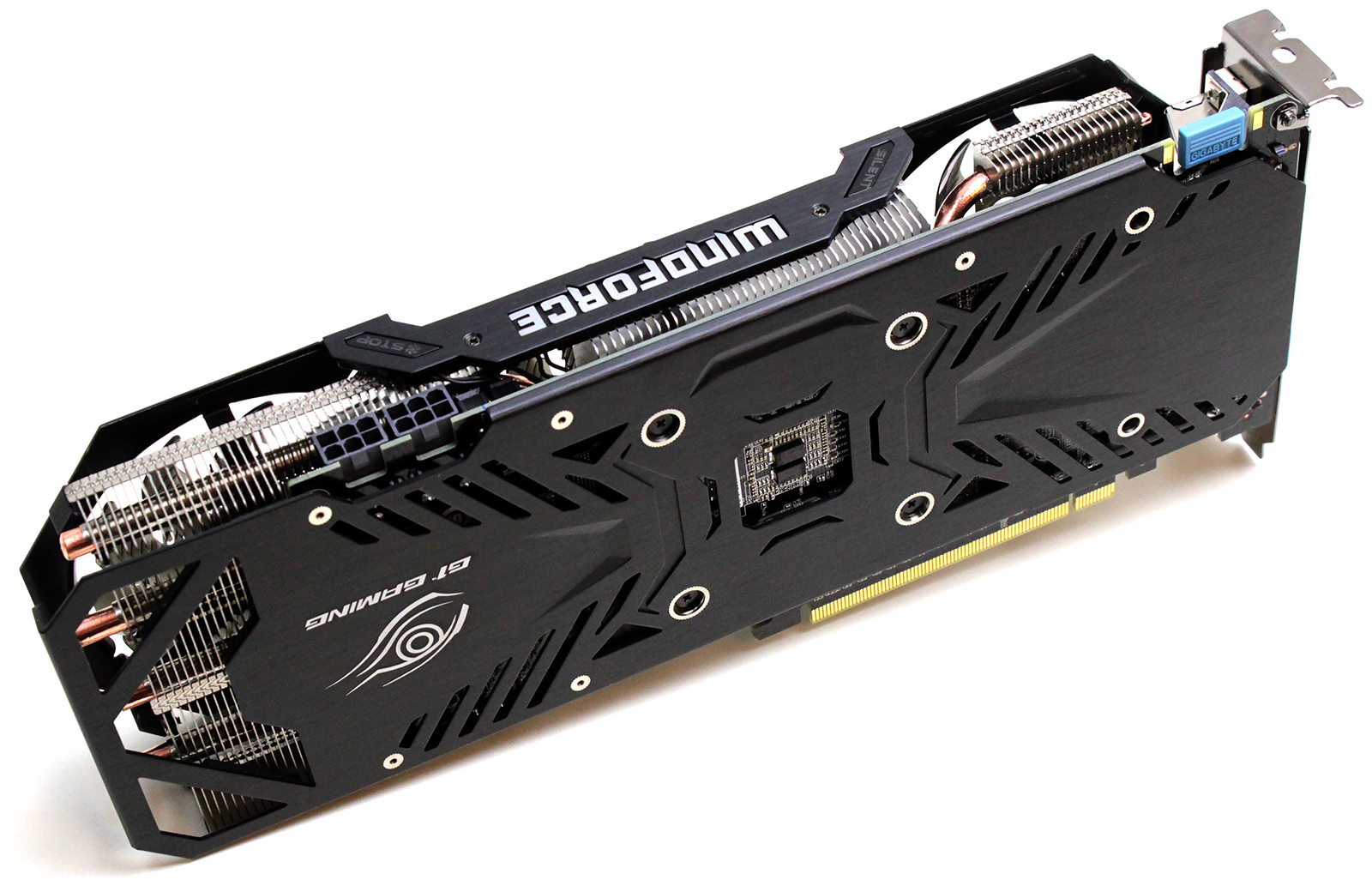 The GTX 960 G1 Gaming is a factory overclocked card with bumped up GPU frequencies, yet thanks to the Windforce cooler it is supposed to be cooler and quieter than the reference card.

The GTX 960 G1 Gaming works at base clock of 1241MHz, while the reference GPU base clock is 1126MHz. Nvidia's GPU Boost 2.0 takes the average GPU clock to 1178MHz for the reference GPU and to 1304MHz for the G1 Gaming card. Note that the actual Boost clock will vary from game-to-game depending on system conditions, and one of the most interesting things with the G1 Gaming is that Gigabyte configured the BIOS to provide high Boost clocks.

To fulfill consumer’s needs, Gigabyte also showed off two other SKUs which are the WF2OC (1216 MHz base /1279 MHz boost) and IXOC (1165 MHz base /1228 MHz boost). The G1 Gaming comes with great performance and a cooling solution for enthusiasts, while the WF2OC is better for value-minded consumers. 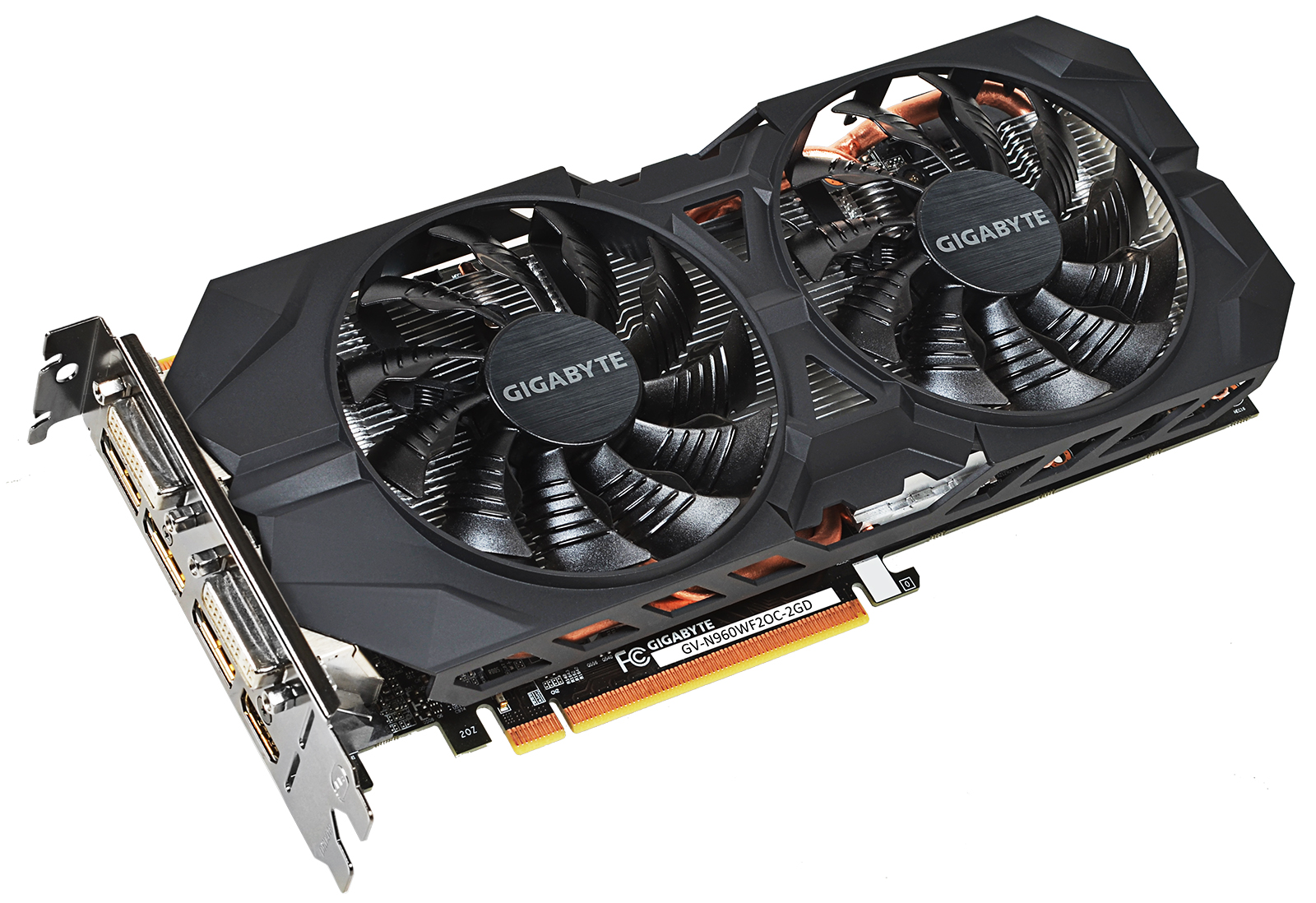 The IXOC card is special by virtue of its short PCB, and this could be a selling point for HTPC builders. The WF2OC is showed on the image above, and below you can see the IXOC card. The MSRP of the GTX 960 G1 is €230, the Windforce OC is priced at €212, while the ITX version costs €195 in Germany. 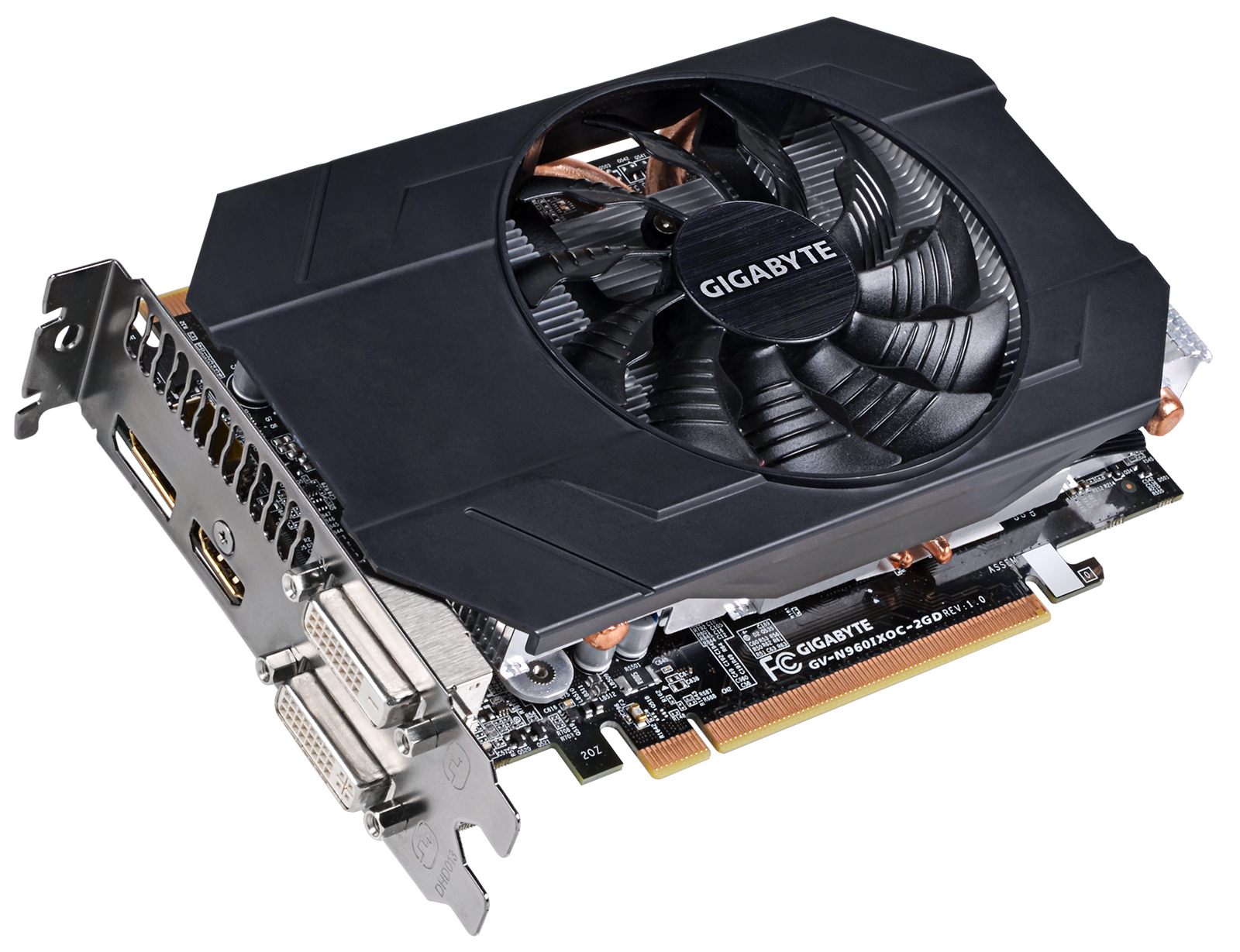 Gigabyte did not change the memory clock. The GTX 960 G1 Gaming features 2GB of GDDR5 memory clocked at 1752MHz (7010MHz effective), providing up to 112.16GB/sec of peak memory bandwidth. 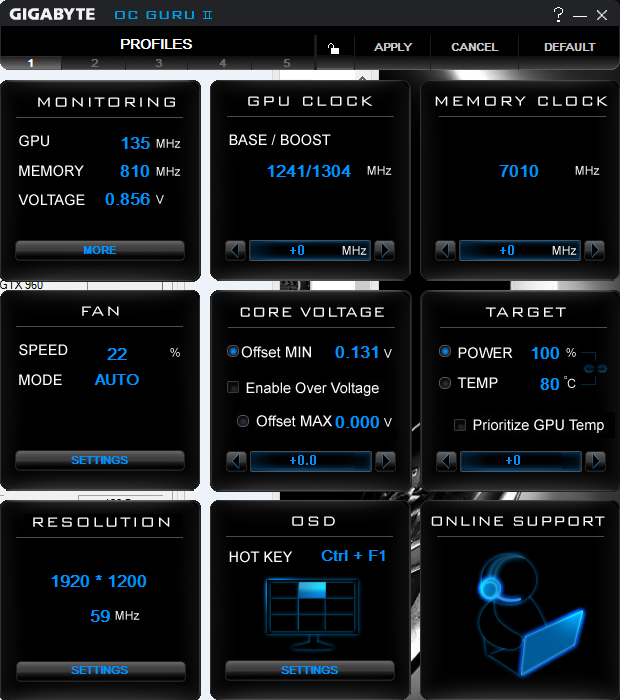 The Maxwell SMM is partitioned into four distinct 32-CUDA core processing blocks (128 CUDA cores total per SM), each with its own dedicated resources for scheduling and instruction buffering. By giving each processing block its own dedicated resources for instruction scheduling and dispatch, Nvidia is able to keep the GPU’s CUDA cores fully utilized more often, improving workload efficiency and reducing the amount of power that usually goes to waste.

To improve the efficiency of the GPU’s onboard caches, Nvidia has also made a number of changes to the cache hierarchy in Maxwell. Each of GM206’s SMM units features its own dedicated 96KB shared memory, while the L1/texture caching functions are combined into a 24KB pool of memory per pair of processing blocks (48KB per SMM). Previous generation Kepler GPUs had a smaller 64KB shared memory function that was also shared as L1 cache.

The memory subsystem of GM206 has also been revamped. Nvidia’s third-generation delta color compression engine offers new modes for color compression, allowing the GPU to use its available memory bandwidth more effectively. When combined with the aforementioned caching improvements in the Maxwell SM, GM206 uses roughly 25% fewer bytes per frame compared to Kepler GPUs. This means that from the perspective of the GPU core, a Kepler-style memory system running at 9.3Gbps would provide effective bandwidth similar to the bandwidth that Maxwell’s enhanced memory system provides.

The memory subsystem of GeForce GTX 960 consists of two 64-bit memory controllers (128-bit) with 2GB of GDDR5 memory. The 128-bit, 7Gbps memory interface is able to effectively provide slightly more bandwidth than its direct predecessor (148.8GB/sec effective in GTX 960 vs 144.2GB/sec in GTX 660).