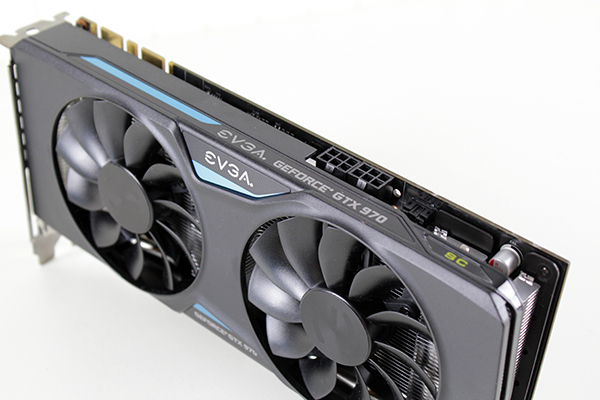 The GTX 980 is built for multi-GPU action. In addition to standard dual-SLI, it can also be used in triple- and quad-SLI setups, as it features two SLI connectors. The fact that this is a dual-slot design also helps.

The GTX 970 SC ACX 2.0 features one standard HDMI connector (2.0 compatible, which includes HD audio and Blu-ray 3D movies support), one standard DisplayPort out and two DVI outs (one single-link and one double-link). All four can be used at the same time, just like on the reference GTX 970 card, with difference that the reference card provides different mix of video connectors. 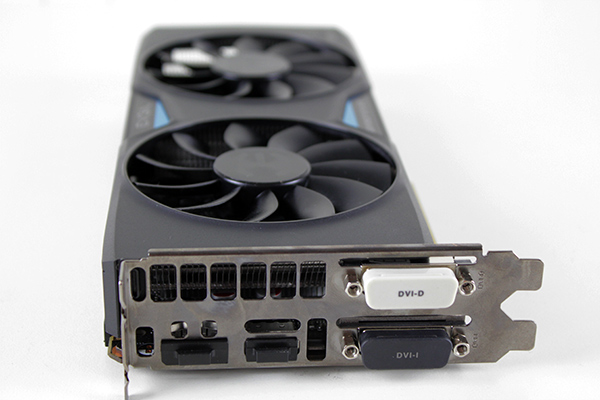 Protective caps are on all video out connectors. The I/O bracket also doubles as an exhaust vent, helping reduce temperatures within the chassis. 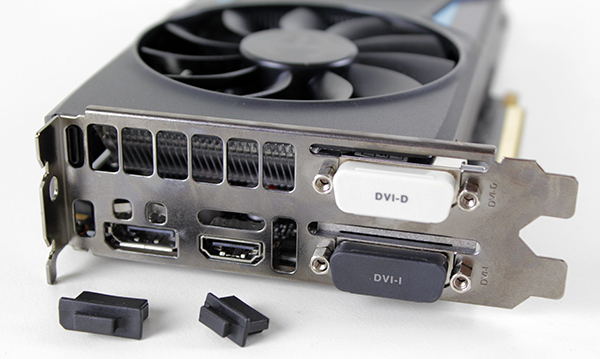 The exhaust vent is much more important on the reference cooler which uses blower style fan (image below). As far as video outputs go on the reference GTX 970, few users will complain, since the reference card features three DisplayPort connectors, an HDMI 2.0 connector (allowing you to run 4K@60Hz), and a dual-link DVI output for a total of five connectors. 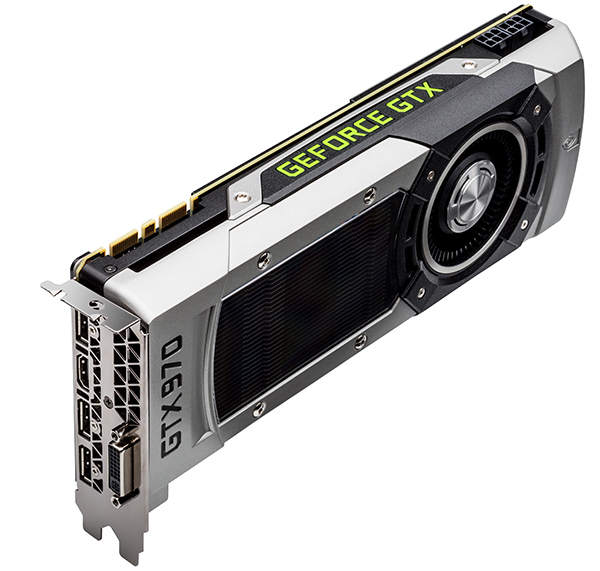 Three G-SYNC displays can be driven from one GeForce GTX 980 / GTX 970 card for instance. It’s important to note that when connecting multiple displays between more than one card, you may see performance differences (similar to previous GPUs). For example, a 3-Way SLI configuration with one display connected to each card, versus plugging all three connectors into the same card.

The GTX 970 SC ACX 2.0 has 4GB of memory, and four of eight memory modules are placed on the back side of the PCB. Our sample shipped without a backplate, but EVGA assured us that backplates will be included on certain SKUs of EVGA GTX 970. Bear in mind that EVGA is offering eight different GTX 970 cards. Even those who decide to purchase a version without a backplate can order one after they register their product and they will receive it free of charge (Updated: free backplaes will be offered only in Europe and only for a limited time). 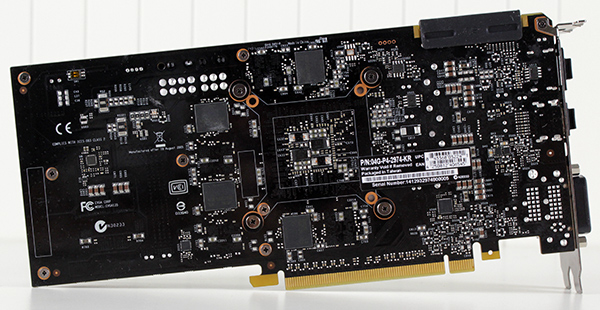 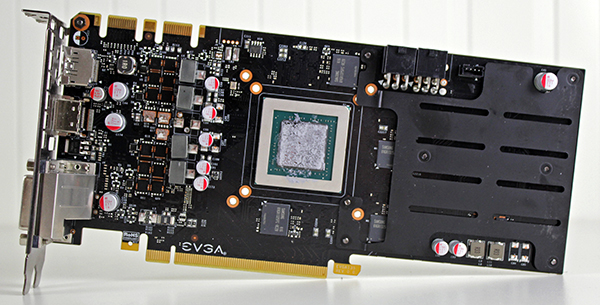 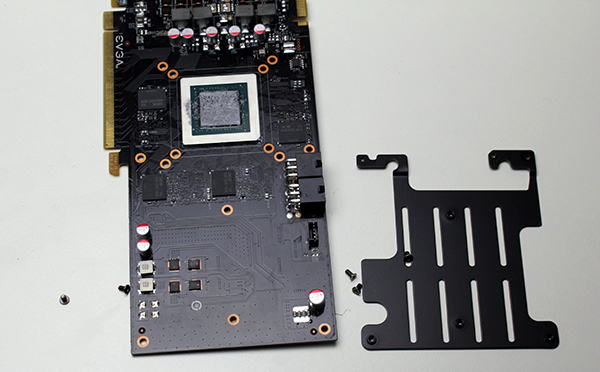 The original ACX cooler for the GTX 780 Superclocked comes with five elaborate heatpipes, while the new ACX 2.0 for the GTX 970 Superclocked comes with only three heatpipes. The way the GTX 970 Superclocked ACX 2.0 heat sink was designed is based on the GTX 970 wattage plus an additional 40% cooling headroom on top of it. There are 3 heat pipes on the heatsink – 2 x 8mm major heat pipes to distribute the majority of the heat from the GPU to the heatsink, and a 3rd 6mm heatpipe is used as a supplement to the design to reduce another 2-3 degrees Celsius. The cooler passed NVIDIA Greenlight specifications. 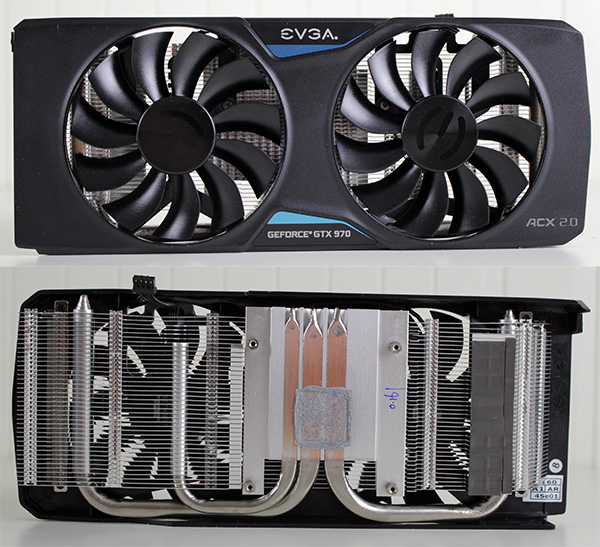 Due to the GPU small die size, EVGA intended for the GPU to contact two major heat pipes with direct touch to make the best heat dissipation, it is not intended to "sit" on the 3rd heat pipe. However you can see that the GPU is overhanging the heat-pipes a little bit on the right. 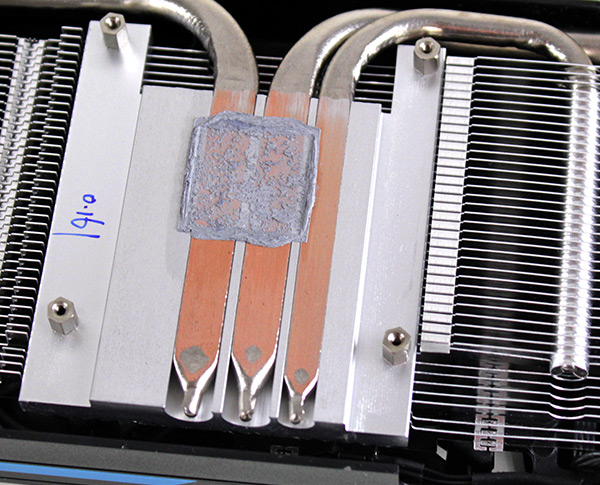 EVGA also has an ACX 2.0 “FTW” version with five heatpipes for those users who want even higher clocks. The Maxwell GPU is an extremely power efficient GPU, and GTX 970 Superclocked ACX 2.0 cooler allows the boost clocks at over 1300MHz.