EVBot’s last firmware version includes support for overclocking the GTX 680 Classified and Classified SR-X motherboard. You can tell whether your hardware supports the EVBot by looking for the 5-pin EVBot connector. The user manual is a bit unclear as it only lists options, without detailed descriptions. Of course, users can always find more info on EVGA’s portal, here,, but it should be said that EVGA aimed EVBot at experienced users that know what to do.

If you want to order the EVBot, we’d first recommend checking whether it’s running latest firmware that recognizes the GTX 680 Classifed. If not, you can flash it via any EVGA motherboard with an EVBot connector, otherwise it will be useless for the Classified.

The EVBot connects to the card via a 105cm cable. It can run three graphics cards and one motherboard simultaneously.

It seems as if the cooler was what kept us from improving our results. We noticed that the card downclocks as soon as it hits 79°C. Unfortunately, this critical threshold is easily hit at clocks above 1350MHz (boost clock), such as by playing a more demanding game. We replaced the reference thermal paste with GC Extreme and knocked a few °C.

We also noticed that the Classified isn’t happy with voltage beyond 1.3v, because it again started downclocking. 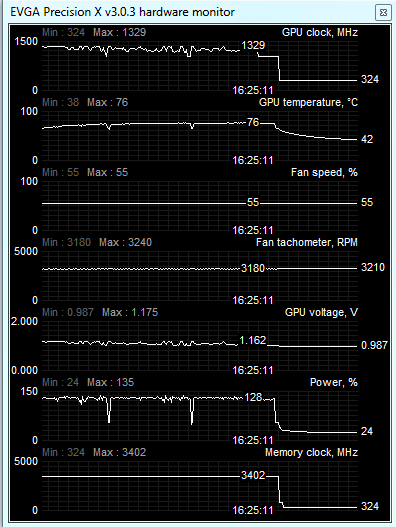