We spent some time over the weekend getting to know EVGA’s GTX 680 Classified a bit better and the review is finally ready. The GTX 680 Classified has ultimately produced the highest overclock we’ve managed on a GTX 680, but only after using the EVBot to overvolt the card. We were still a bit disappointed in general as the GTX 680 didn’t fully meet our expectations, and you’ll soon see why.

Before we move on, we’d like to inform our dear readers, who think that we intentionally left out AMD’s fastest cards, that we’re expecting Sapphire’s HD 7970 VaporX in our lab, so we’ll include it in the tables as soon as possible. Besides, our mission today is to show the GTX 680 Classified in all its glory, rather than engage in red vs. green debates.

EVGA GTX 680 Classified is much different than the reference design. The company added 10 additional phases for the GPU, bringing it up to 14-phase power. The company used a wider and longer PCB with a cooler that was also made bigger, whereas the memory capacity was doubled. The last detail is the EVBot connector, which can be used for sensor readouts as well as overvolting.

The memory was left at reference clocks, meaning 1502MHz (6008MHz effectively), whereas the capacity is up from standard 2GB to 4GB. Although the card’s memory was doubled, it wasn’t overclocked so the bandwidth stands at 192.3GB/s. 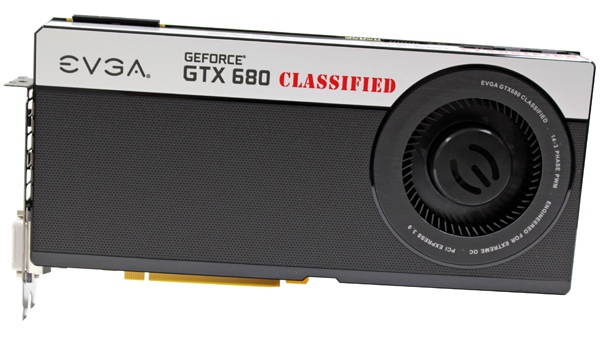