Eight months ago we tested Point of View / TGT GTX 570 Beast graphics card which took the title of the fastest among Geforce GTX 570s. Today we have another GTX 570 Beast card which runs at the same clocks as the first GTX 570 Beast. However, the new Beast comes with improved cooling and more memory, which is the reason why its full name is GTX 570 Beast 2.5GB.

Our readers know that TGT is Point of View’s right hand when it comes to overclocking graphics, and should know that only the fastest graphics card get the Beast treatment. Of course, TGT not only handpicked the GPUs but made sure that each and every one runs at high clocks for a long time.

Nvidia’s plans for new graphics card series have obviously been moved towards the end of 2011, so TGT decided to use the existing Fermi GF110 chips. In case you forgot, Geforce GTX 570 is based on Nvidia’s Fermi architecture, namely the most advanced Nvidia’s GPU so far – the GF110. The card offers excellent performance in the high end segment and is the second fastest single-GPU card in Nvidia’s arsenal.

The GTX 570 Beast 2.5GB runs at 841MHz for the GPU, which is 109MHz higher than on reference cards (732MHz). We’re pretty glad that TGT strapped the new Beast with adequate cooling which cools well and stays quiet while doing so.

Apart from the factory overclock, special dual-fan cooler and double the memory, the GTX 570 Beast 2.5GB can boast a rich video out panel. It includes standard HDMI and DisplayPort connectors, as well as two dual-link DVIs. 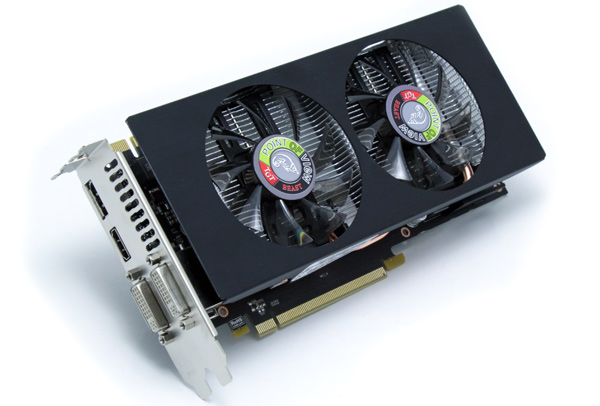