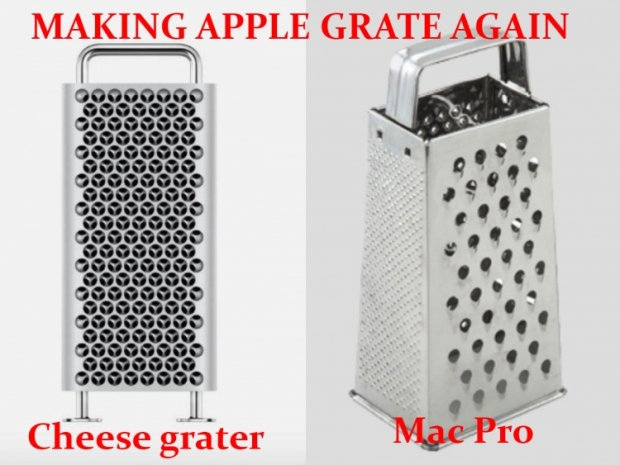 Also warns that you could end up with a slower computer

Fruity cargo cult Apple has issued some specs of its expensive giant cheese grater Mac Pro and has made the mistake of being a little too honest about what the $6,000 machine can do.

The specs were spotted by the Verge.  There are the expected marketing claims such as “cures cancer” and “is million times faster than a standard PC which has not been switched on” (ok we made those claims up) but there is also some rather important information which you might want to know before splashing out on the thing.

Apple makes a point to note that its pricier, higher core count Xeon processors offer “increased multithreaded performance” at the expense of “decreased base clock”. The white paper specifically tells customers that “it is important to know if your primary applications can scale to higher core counts to get maximum performance from top-end Xeon processors”. In other words: make sure you can use those extra cores, or you’ll get stuck with a slower computer.

Amusingly Apple notes that the Mac Pro can draw so much power that “facility power sources should be carefully considered to avoid overloading a given circuit, especially for a fully configured system with displays and accessories, or multiple Mac Pro systems”.

So if you turn it on and all the lights dim you are probably better off with something that knows how to use power better.

The other bit of advice is that the 24- and 28-core processor options can support up to 2TB of RAM, but Apple offers much less than that because 2TB of RAM would require unbalanced DIMM configurations (where you have a different amount of RAM on different sticks), which Apple is looking to avoid.

Apple says that the Pro Display XDR can “sustain 1000 nits of brightness across the entire screen indefinitely in environments up to 25° C (77° F)”. Crank the brightness up past 1,000 nits, or the temperature past 77 degrees Fahrenheit, and the brightness may go down.

Last modified on 26 February 2020
Rate this item
(1 Vote)
Tagged under
More in this category: « Analyst predicts Apple will release an ARM-based Mac ARM smashes chip record in fourth quarter »
back to top