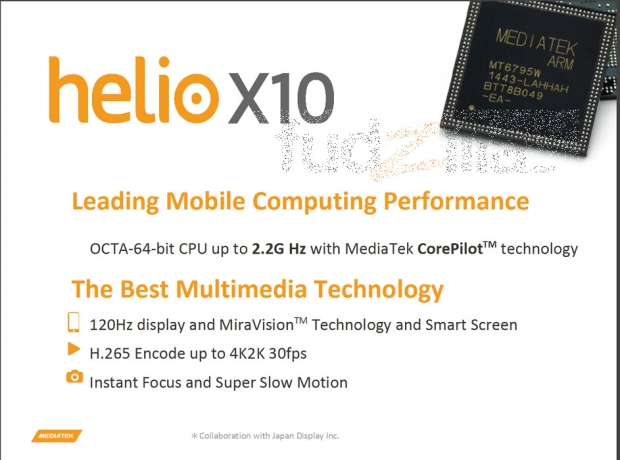 Starting last week, following a strong showing at the Mobile World Congress, MediaTek has a new brand name for its premium phone SoCs that is easier to remember than MT, followed by four digits.

MediaTek's current flagship SoC is branded MT6795, where MT stands for - you'll never guess - MediaTek. The competition is using similar number schemes, but also simpler brands like Snapdragon, which is easier to understand and remember. For example, the Snapdragon 810 is also known as MSM8994 and MSM according to Qualcomm´s Wikipedia webpage means Mobile Station Modem (MSM).

MediaTek is going to use Helio X branding for its high-end SoCs such as MT6795. This SoC will be known as Helio X10. The X comes from Extreme performance, something that we saw in the chip industry before. This is MediaTek's brand for the state of the art mobile computing technology and uncompromising performance and multimedia peformance, the company's top of the hill products. Helio comes from the ancient Greek Sun god Helios.

The runner up parts will be branded as Helio P series, where you can expect Premium performance optimised for battery life, PCB footprint and the form factor. This product like should enable high-end features in super slim designs aimed at the mainstream/performance market segment.

We got our first in-depth branding details from MediaTek's Vice President, Worldwide Public and Analyst Relations, Kristin Taylor, as well as some insights from Mohit Bhushan VP & GM, MediaTek Head of US Business Development. We had a chance to talk to Taylor and Bhushan last week at the Mobile World Congress 2015 in Barcelona.

The Xelio X10 is an 64-bit LTE octa-core 2.2GHz design, with eight A53 cores emploring patented CorePilot technology. The chip also includes some cool and differentiated multimedia features. We have been talking about the 120Hz  display support that is a great feature when you see it live. This is the world's first chipset provider to endorse 120Hz technology into mobile. The chip supports MediaTek's MiraVision display picture quality technology, as well as the SmartScreen algorithms that you can check in the video below, explained by Russ Mestechkin, Director of corporate sales in Latin America. SmartScreen is an image enhancement technology that help render images better, using a custom pixel-per-pixel algorithm. The goal is to make phones with SmartScreen appear brighter under direct sunlight than the competition.

We can also remind you that Xelio X10, previously known as MT6795, has support for H.265 encode up to 4K2K 30fps, as well as Instant focus and Super Slow Motion technology. We hope to see Helio X10 in some important design wins such as the HTC One E9 codenamed A55 that we mentioned the other day, as well as the Meizu MX5, and hopefully some other flagship phones as well.

The company representative also added that MediaTek is making aggressive strides into North America and Europe as well as driving significant sales in India, South America and Russia, these are the companies key markets, well including whole Asia of course.

Last modified on 12 March 2015
Rate this item
(4 votes)
Tagged under
More in this category: « The fact that Samsung 14nm SoC works surprised the industry HiSilicon Kirin 930 SoC points to a new trend »
back to top