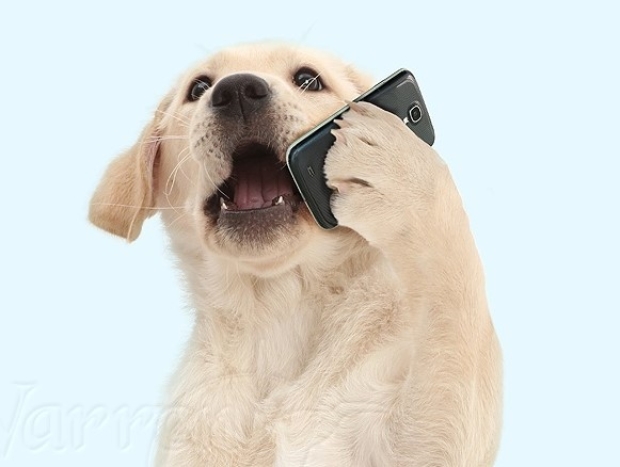 Calling your owner on the dog and bone

Boffins have created a hi-tech option for canines left home alone: a ball that allows them to call their owners on the old dog and bone.

The device -- nicknamed the DogPhone -- is a soft ball that, when moved, sends a signal to a laptop that launches a video call, and the sound of a ringing telephone. The owner can choose whether to take the call, and when to hang up, while they can also place a call to their pet -- although the dog has to move the ball to pick up.

The research, which is published in the Proceedings of the Association for Computing Machinery on Computer-Human interaction and is being presented at the 2021 ACM Interactive Surfaces and Spaces Conference in Lodz, Poland, reveals how Dr Ilyena Hirskyj-Douglas, of the University of Glasgow, and first author of the research and researchers from Aalto University in Finland settled on a soft ball to create the device.

The DogPhone underwent a number of iterations to ensure it had the right level of sensitivity towards movement -- these were tested over 16 days by Hirskyj-Douglas and her nine-year-old black Labrador, Zack.

Being a Labrador which are not exactly the brightest of test subjects, Zack didn’t really know what he was doing. Despite having been shown five times how the system worked.

" Zack rang me but was not interested in our call instead was checking for things in his bed", Hirskyj-Douglas noted during the testing of one iteration.

Another entry reveals the potential pitfalls of the DogPhone. "Zack walking around wagging and then laying down. I was in a meeting so had to hang up quickly", one record reveals.

In one case Zack triggered the call with their butt. “This could have been deliberate and the dog's unique way of triggering an interaction", the researchers wrote. Butt calls are normal with mobiles, and there is not much unique about them.

Last modified on 22 November 2021
Rate this item
(3 votes)
Tagged under
More in this category: « Xiaomi 12X to pack Snapdragon 870 SoC OnePlus 10 Pro leak shows an impressive flagship »
back to top