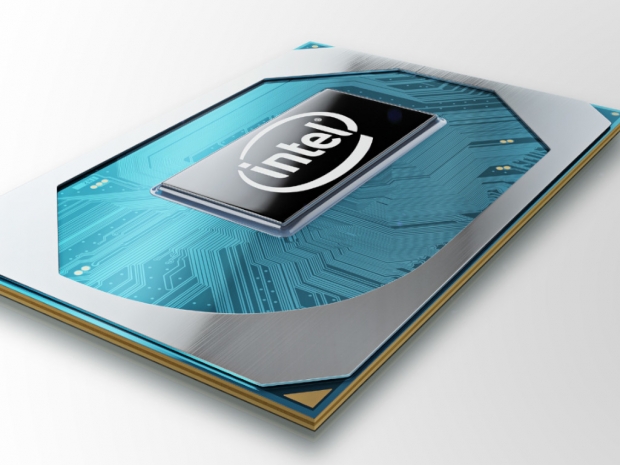 It is not surprising that just two days after AMD had its moment and launched its Renoir high-end notebook processors, Intel has launched six new Core H series where the top contender goes all the way to 5.3 GHz.

The product generation was developed under Comet Lake H, and the generation offers a mix of 45W TDP Core i5, Core i7, and Core i9 processors. 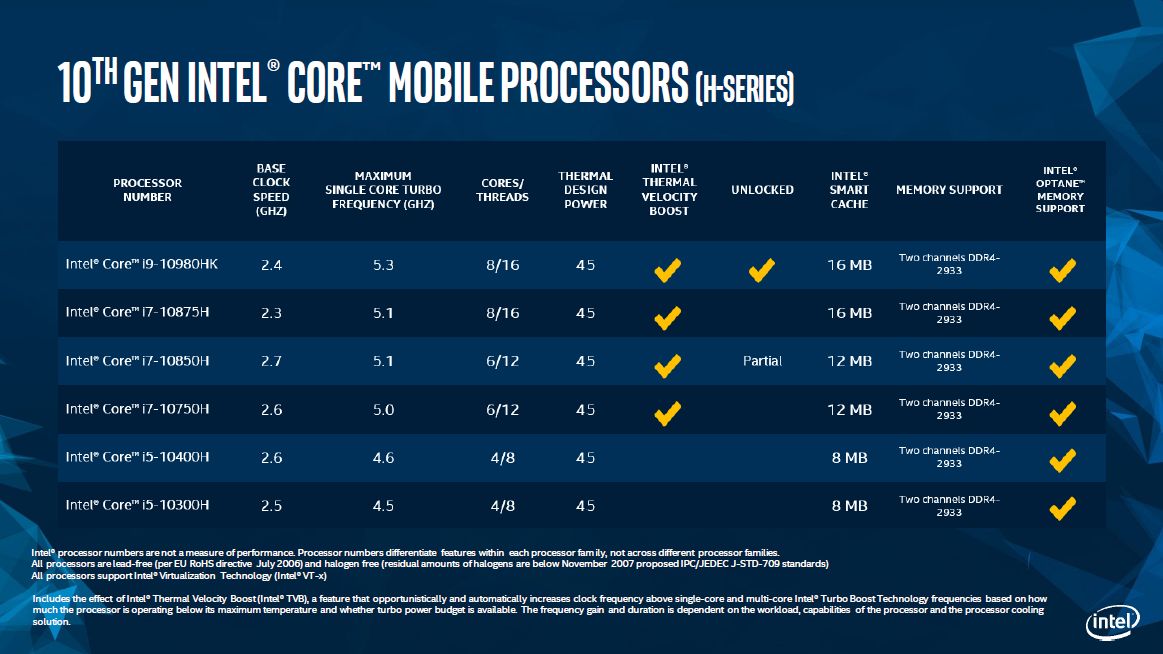 There is a choice of three Core i7 processors for the OEMs. The Core i7 10750H is the slowest of three, and it starts at 2.6GHz CPU base clock that tops at 5GHz. The Core i7 10750H has six cores and twelve threads, 12MB cache and 45W TDP. It also supports Intel thermal velocity boost.

The second in line is the Core i7 10850H, and it starts at 2.7GHz CPU base clock that tops at 5.1 GHz. The Core i7 10850H has six cores and twelve threads, 12MB cache and 45W TDP. It also supports Intel thermal velocity boost, and intel calls it partially unlocked. The technology limits the overclocking to 400MHz maximum single-core overlock, and Intel had this with previous generations too.

The fastest Core i7 10875H is eight-core and sixteen treads, has a base core clock at 2.3GHz, but it turbo clocks to 5.1GHz. It comes with 16MB cache and still has 45W TDP and supports thermal velocity boost

The star of the launch is the Core i9 10980H, a 2.4GHz best base clock, and turbo clock all the way to unseen 5.3GHz. This eight-thread and sixteen core processor will power some of the fastest notebooks ever designed, and it comes with thermal velocity boost, 16MB cache, same 45W TDP, and it comes fully unlocked. AMD might have 7nm but can't get the clocks up higher than 4.4Ghz, while Intel has clearly passed 5GHz by 300 MHz. These are apples and oranges but just wanted to the point that it looks like you cannot have it all.

For those not familiar with the term, the thermal velocity boost automatically increases clock frequencies by up to 200 MHz as long as the processor temperature is 65°C or lower and the TDP power budget is still available.

Intel also said that the new Core H generation comes in 100+ machines across consumer, commercial, and workstation aiming for a gaming leadership at scale. Nvidia also claims 100+ designs for its GPUs, meaning that most of the Core H series will get an Nvidia GPU, but some Radeons will find their place in the mix. We mentioned yesterday that Gigabyte, Razer and many others have announced their own designs.

Intel made a comparison between three-year-old notebooks, and it looks rather good. Games run between 23 (Far Cry New Dawn high, Assassins Creed Odyssey 1080p high) to 54 percent with Red Dead Redemption 2 at 1080P high details. Intel is comparing Core i7 7820HK powered machine and the Core i9 10980 HK.

There will be real benchmarks coming very soon from all the OEMs that released its new gaming, workstations powered by the 10th generation Core H and it will be interesting to see how it behaves against AMD's Ryzen 9 Renoir 4000 series.

Last modified on 03 April 2020
Rate this item
(9 votes)
Tagged under
More in this category: « Nvidia launches GeForce RTX 2080 SUPER for laptops Samsung does better than expected »
back to top