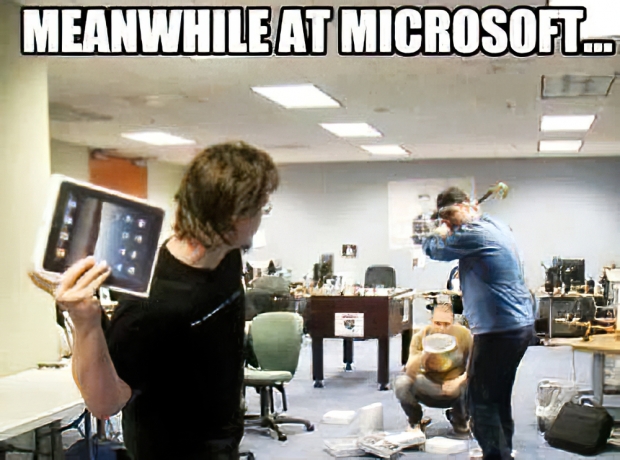 Still yet to make any impact

A decade ago, Apple's spiritual head Steve Jobs promised Apple fanboys that his brand new tablet gizmo would change the world – it didn't thanks mostly to limited software and simple evolution of mobile tech.

While it temporarily spiked Apple sales and lasted longer on the market than Steve Jobs, it really did sod all for the mobile world.

Part of the reason is Apple's software which, while a little better than iOS, was not similar enough to a PC to be any real use. Most PC users could put up with a lack of real multitasking in a phone but could not understand why a tablet, which was so much bigger, could not manage it.

Apple's Tablet is hardly multi-tasking. To launch the first app, you tap its icon on the home screen, just like on the iPhone, and just like on the iPad before split-screen multitasking. Tapping an icon to open an app is natural and intuitive. But to get a second app on the same screen, you cannot tap its icon. You must first slide up from the bottom of the screen to reveal the Dock. Then you must tap and hold on an app icon in the Dock. Then you drag the app icon out of the Dock to launch it in a way that it will become the second app splitting the display.

There were other problems which indicated that Apple had not really made its device easy. Even the Tame Apple Press had to admit that no one would ever figure out how to do a split-screen mult-task unless they already knew how.

What was equally unfortunate was that Apple's tablet push killed off nearly ten years of development from Microsoft.  To be fair Microsoft was also heading down a blind alley on its development.

Steven Sinofsky, the former President of the Windows Division at Microsoft said: "We were fixated on Win32, Pen, and more. The success of iPhone (140K apps & 3B downloads announced that day) blinded us at Microsoft as to where Apple was heading. Endless rumors of Apple's tablet *obviously* meant a pen computer based on Mac. Why not? The industry chased this for 20 years."

He said that Jobs' tablet did kill off Net Books, which for our younger readers, were tiny cheap Windows PCs which, while portable, ran like an asthmatic ant with a heavy load of shopping.

Sinofsky said that the iPad was a classic lump of disruptive technology. It didn't do lots of things but what it did do - mostly email - it did really well.

However, it was no game-changer and its influence was negated by making phones a bit bigger.

Last modified on 29 January 2020
Rate this item
(1 Vote)
Tagged under
More in this category: « Apple’s Safari anti-tracking feature allows users to be tracked Samsung Galaxy Book S preorders up »
back to top