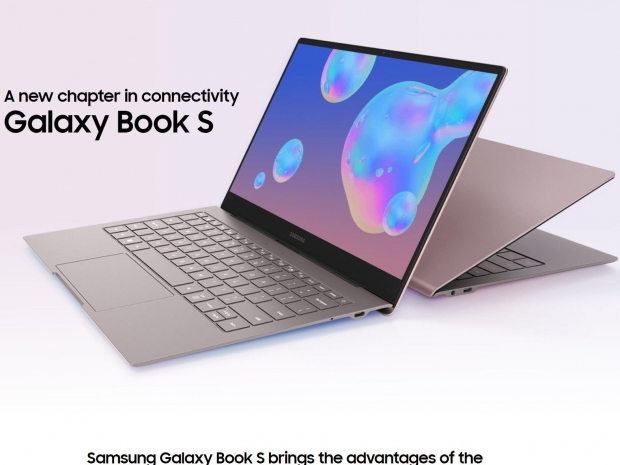 Samsung is one romantic South Korean company as after months of delays it finally plans to ship Snapdragon 8CX powered Samsung Galaxy Book S and promised to deliver before February 14. All that and the promise of a 25-hour battery for video watching.

Our well-informed sources have confirmed that Samsung ironically had issues with the screens. The company is not using a Samsung display. It is using a third party for this specific model. Now all the obstacles are in the past, and the preorders opened last night.

The South Korea giant is only offering one SKU with 8GB RAM 256GB storage in mercury gray but if you pre-order before the device gets available, Samsung is offering $100 Samsung credit for its store and accessories. The storage can expand to 1TB via a microSD card, but it won't run that fast due to the limitations of the microSD interface.

For people who like to finance things, the Galaxy Book S will cost $27.78/month for 36 months and  zero percent APR.

Qualcomm has high hopes from Galaxy Book S as it should offer a much better battery life compared to other Snapdragon 8CX flagship device, Microsoft Surface X Pro. The Snapdragon 8CX has four performance cores clocked up to 2.84GHz and four efficiency cores clocked at 1.8 GHz optimized for battery life. The SoC comes with Adreno 680 GPU capable of 1842.5 GFLOPs, Hexagon 690 delivering up to 9TOPS.

Let’s come back to the modem. The Snapdragon X24 LTE modem is Cat 20 with download up to 2 Gbit/s, 7x20MHz Carrier Aggregation, 256-QAM, 4x4 MIMO on five carriers. It is capable of upload speeds up to 316 Mbit/s, 3x20MHz CA, 256-QAM. The 5G version might be in the works but as we reported recently, Lenovo Yoga 5G is set to be the first 5G notebook running Windows 10.

We had a pleasant experience withthe  Surface X Pro, but we would love to see better battery life and at $999, Samsung has an obvious pricing benefit. The same spec machine from Microsoft with a basic keyboard will cost $1,238.99.

Last modified on 31 January 2020
Rate this item
(1 Vote)
Tagged under
More in this category: « iPad turns ten Huawei outsells Apple »
back to top