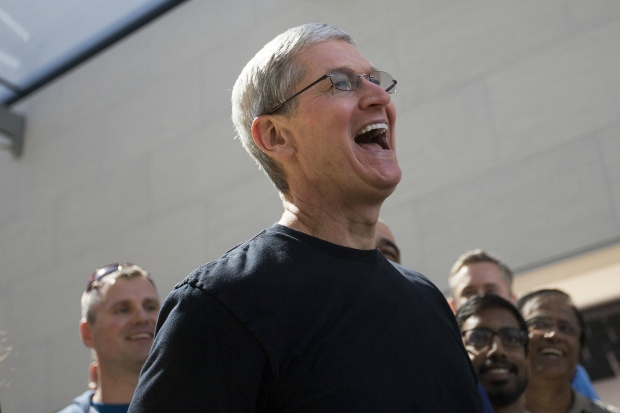 For the same spec as a two year old Samsung

A research note shared by a Goldman Sachs analyst has suggested that the 256GB iPhone 8 will cost consumers $1,099.

The note has also stated that the smartphone will boast an OLED display, 3D sensors and augmented reality technologies.

The latest predictions regarding Apple's next generation phone was revealed to CNBC by Simona Jankowski who clearly had a stroke and lost the power of speech when saying that “the first $1,000 iPhone can drive meaningful upside”.

We think Jankowski meant that Goldman Sachs thinks that Apple will manage to convince enough people that paying double for a phone which is not much different from a two year old Samsung to make a lot of money from it.

'We think the higher demand for the larger (5.8?) form factor will be supported by the fact that the iPhone 8 will have compelling new features not available in the smaller form factors,' she wrote.

A new report from Digitimes claims that the Taiwan Semiconductor Manufacturing Company (TSMC) has begun production of Apple's A11 processor that is set to power the OLED iPhone 8.

TSMC had initially aimed to start production of the chip in April, but due to 'issues involving stacking components' it had been delayed – sources have noted that the issues have since been resolved.

And the new information has suggested that iOS users could purchase the device as soon as October or shortly after the release of the iPhone 7s models, which are also said to be equipped with the A11 processors.

TSMC would begin fabricating the wafer starts needed for the production of A11 processes on June 10 and deliver the chips in volume quantity in the second half of July.

'iPhone assemblers Foxconn Electronics, Winstron and Pegatron were accelerating the recruitment and training of new workers in China in preparation of mass production of the new iPhone,' said the report.

Although the iPhone 8 may be released on time, KGI's Ming-Chi Kuo warned that there is a 'rising probability' of the 'worst scenario' for production and shipments of the iPhone 8.

Kuo thinks that the company is facing production troubles due to 'major hardware upgrades' could result in a shortage of devices hitting the market at launch.

'We are seeing more evidence that the worst-case scenario forecasted in our April 19 report could materialize, where new iPhone shipments in 2H17F are revised down to 80-90mn units from 100-110mn units (vs. consensus of 100-120mn units),' reads the research note.

Last modified on 15 May 2017
Rate this item
(0 votes)
Tagged under
More in this category: « Galaxy Note 7R will be cheaper than chips HTC officially unveils the U11 flagship smartphone »
back to top