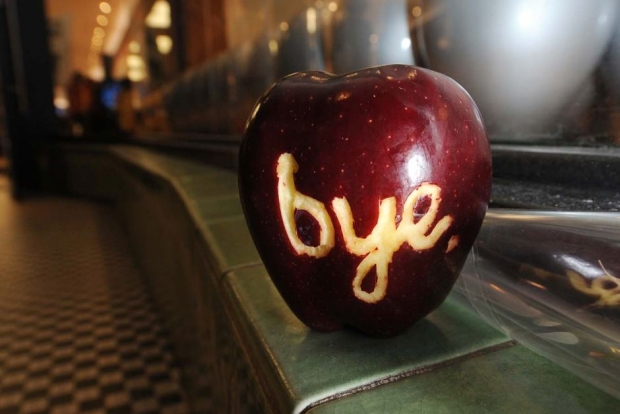 Apple shares are continuing to fall as more investors realise that the share price is not going to go up any more.

For a while now people have been buying Apple shares with the expectation that they will always go up. This always was largely based on a fantasy created by the Tame Apple Press that assumed the company would keep coming up with new technology ideas which would always be successful.

However lately Apple has not come up with any new ideas and has taken to re-issuing its old phone designs. It has also been floundering in its key Chinese market. The company's only new idea has been for content creation through its Apple Music streaming brand. The only problem with that is that the software has been killing off user's iTune libraries.  It has also been banned in China which means that hopes that Apple would make money there are still thwarted.

Shares of Apple dropped below $90 on Thursday for the first time since 2014 as Wall Street worried about slow demand ahead of the anticipated launch of a new iPhone later this year. Some more reasonable analysts even think that the iPhone 7 is going to be a disaster because it lacks any new tech and has the same design as the poor performing iPhone 6S

Component suppliers in Taiwan have confirmed that they have received fewer orders from Apple in the second half of 2016 than in the same period last year.

Rosenblatt Securities analyst Jun Zhang saidt that investors were getting negative data points about component orders and production forecasts, and the features on the new iPhone do not seem to be a big change from the 6S.

Apple briefly relinquished its position as the world's largest company by market capitalisation to Alphabet – oh the horror.

At the close, Apple and Google each had market values of about $495 billion, according to Thomson Reuters data. In the past year, Apple's market capitalization has fallen by more than $200 billion. Which just goes to show this whole value thing was an illusion.

Last week, Dialog Semiconductor, which sells chips used in iPhones and other smartphones, cut its revenue outlook due to ongoing softness in the smartphone market.

The Tame Apple press is trying to do its best to find analysts who recommend buying the stock claiming it is too cheap.However how much should you pay for an outfit which has milked its cash cow and has nothing new on the horizon.