The Mobile World Congress 2014 has kicked off in sunny Barcelona and Sony was in the center of attention with a couple of smartphones including the new Xperia Z2 flagship as well as the Xperia Z2 Tablet.

Buliding on the success of the last year's Xperia Z1 flagship, the new Xperia Z2 smartphone is built around a 5.2-inch 1920x1080 Triluminos IPS panel screen which uses the same technology seen in some Sony TVs. The sleek and IP58 certified case is quite similar to the Xperia Z1.

Powered by Qualcomm's new Snapdragon 801 SoC with four Krait 400 cores clocked at 2.3GHz and Adreno 330 GPU, which brings some impressive improvements in camera sensor processing speed. Paired up with 3GB RAM, the new Xperia Z2 smartphone will pack quite a punch as well. It features the same 20.7-megapixel rear camera with the same 1/2.3" sensor placed behind a 27mm G lens with f/2.0 aperture, but thanks to the Snapdragon 801 SoC, now can record 4K videos at 30fps.

The improvements for the new Xperia Z2 extended beyond the screen so it comes with new stereo speakers and also with some neat digital noise cancellation which will come in handy with the included Sony MDR-NC31EM headset.

Despite the increased screen size as well as the heftier 3200mAh battery, Sony managed to both lighten and slim down the Xperia Z2 smartphone. The dimensions are set at 146.8x73.3x8.2mm and it weighs 158g.

According to Sony, the new Xperia Z2 smartphone will be available as of March in white, black and purple colors and cost around €599. 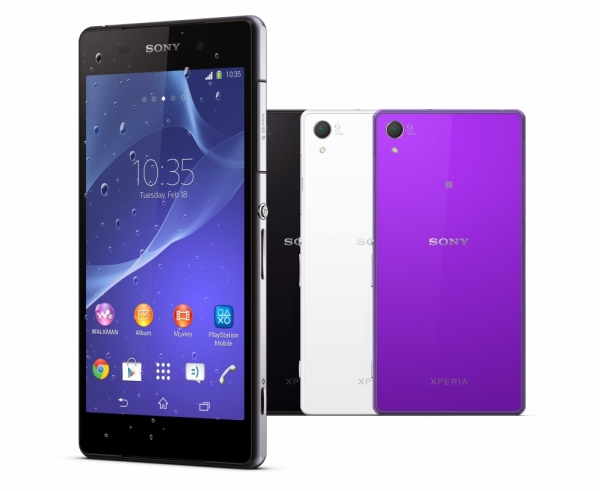