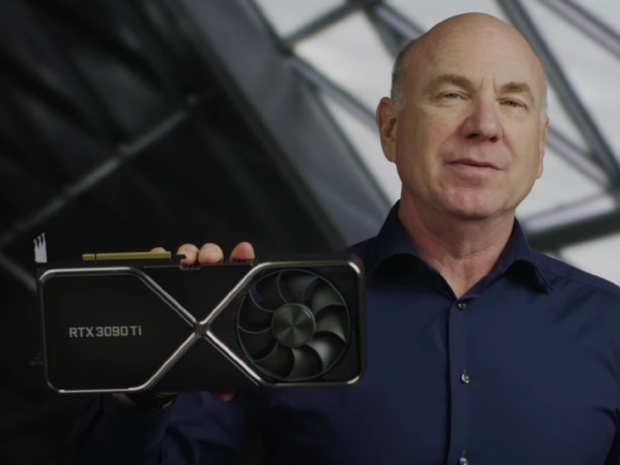 It appears that the upcoming Geforce RTX 3090 Ti could come with a $500 premium over the RTX 3090, so we are looking at $1,999 for the RTX 3090 Ti Founder's Edition. Considering the first leaked 3DMark results, it will be hard to justify the higher price tag, especially at a significantly higher TDP.

Nvidia has apparently set the price for the Geforce RTX 3090 Ti at $1,999, which ends up $500 more expensive than the RTX 3090. Of course, we are talking about Nvidia's Founder's Edition version, so custom versions from Nvidia AIC partners will end up with an even higher price tag.

With full reviews expected later today, the first leaked 3DMark results show an average of around 7% percent, according to Videocardz.com. To make things worse, these are the numbers for custom and probably factory-overclocked cards. This does not come as a big surprise considering that the RTX 3090 TI has just slightly more CUDA cores (10752 vs. 10496) or 2 more GPCs, and it appears that the faster 21Gbps memory does not change much.

The TGP is set at 450W but some custom versions will push that TGP up to 510W, all thanks to the new 1x16-pin power connector.

In any case, we'll get the full performance figures later today.

Rate this item
(16 votes)
Tagged under
More in this category: « It is confirmed GPU prices are dropping Intel officially launches Arc A-series Graphics »
back to top