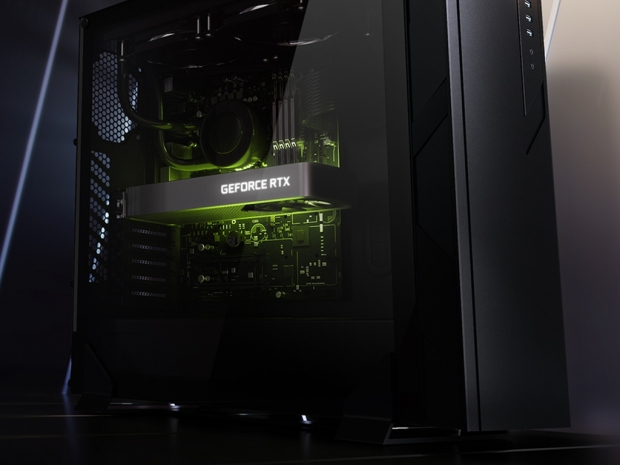 Nvidia has launched its latest Geforce RTX 30 series graphics card, the Geforce RTX 3060. Featuring a GA106 GPU with 3584 CUDA cores and packing 12GB of GDDR6 memory on a 192-bit, all at $329, the Geforce RTX 3060 promises big improvements over the RTX 20 series cards and brings 60FPS+ ray tracing with DLSS in games like Watch Dogs: Legion, Fortnite RT, Cyberpunk 2077, Shadow of the Tomb Raider, and others.

As detailed and rumored earlier, the Geforce RTX 3060 is actually the first Geforce graphics card based on the Ampere GA106 GPU, made on an 8nm Samsung manufacturing process. It packs 3584 CUDA cores, 28 RT cores, and 112 Tensor cores, as well as 112 TMUs and 48 ROPs. Nvidia has decided to pack 12GB of 15Gbps GDDR6 memory on a 192-bit memory interface.

The reference clocks for the Geforce RTX 3060 are set at 1.32GHz base and 1.78GHz Boost clocks but so far, most OC versions from various Nvidia AIC partners are pushing the GPU Boost clock up to 1852MHz.

In terms of performance, you can expect the Geforce RTX 3060 to have no trouble with most games at 1440p resolution without ray tracing, and, according to Nvidia, it can run some games even with raytracing, mostly thanks to DLSS.

Nvidia has pretty much detailed the performance as the gap between the RTX 3060 and RTX 3060 Ti is so tight at around 20 or so percent. This does not come as a surprise considering the $70 MSRP price difference, as the RTX 3060 Ti MSRP is set at $399. Of course, AMD's RX 6700 series is just around the corner, and it will be interesting to see how much pressure will these put on Nvidia's lineup.

It is left to be seen if Geforce RTX 3060 graphics cards from various Nvidia AIC partners will stick to $329 MSRP (or slightly above for custom OC cards), and if Nvidia's recent limitation to Ethereum crypto-mining will actually leave more RTX 3060 on retail/e-tail shelves.

Here are some of the reviews from usual suspects.

Last modified on 25 February 2021
Rate this item
(0 votes)
Tagged under
More in this category: « Nvidia to limit RTX 3060 mining performance Nvidia RTX card shortage expected throughout the year »
back to top