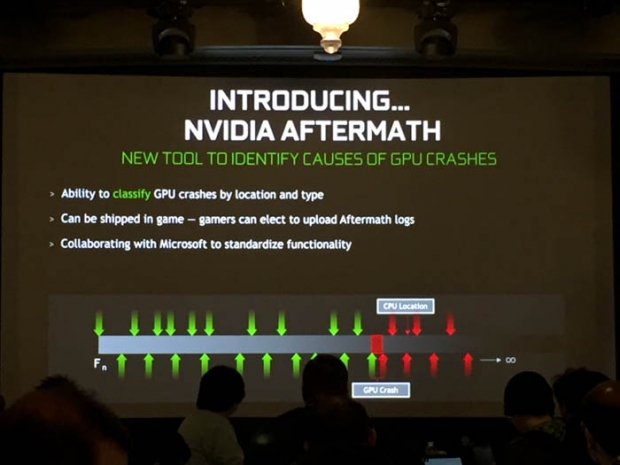 During its Editors Day event last Tuesday, Nvidia team members highlighted a useful utility that will aid developers in identifying the causes of specific in-game crashes and app slowdowns using a crowdsourced data collection method to identify their root causes by location and type.

Nvidia Aftermath is the newest member of the company’s game developer arsenal that will drop breadcrumbs of information and evidence of exactly where and when a crash occurs onto a GPU timeline to determine what work it was doing prior to a system freeze or reboot. It also features the ability to request the current device state, and then place this data into a log file for error analysis and diagnostics.

Enables collective error reporting from players on behalf of developers

The idea is to bundle this developer utility with as many currently shipping games as possible to allow game players to upload their Aftermath logs to game developers. While the concept sounds very similar to Microsoft’s built-in Windows Error Reporting mechanisms, the company says that Aftermath’s low-performance footprint is apparently low enough to be “measured in the noise” – or the collective breadcrumb data it gathers into the log file. At this point, it is unclear whether the API will be integrated into upcoming Geforce driver versions or will be implemented as a service that runs alongside any open game runtime environment.

The company is working closely with Microsoft to standardize this with DirectX 12, which it hopes will gain more developer momentum after the release of its latest GameWorks software packages adding full support for highly asynchronous, non-graphics workloads including particle simulations. The utility will be available on Nvidia’s developer website within a couple of weeks.

Nvidia says that its path to game optimization starts with the game developers at the top, followed by the release of developer toolkits, and then the driver team and the architecture team. This is the order of emphasis it has been using to optimize its driver releases most effectively.

On Wednesday, it announced several new resources to its GameWorks software suite, including support for DirectX 12 to unify both graphics and simulation. While support for the latest API comes nearly a year and a half after the initial release of Windows 10 in July 2015, developers have been mainly limited in their use of non-graphical simulations because most games can only allocate a few milliseconds to run each type of effect while delivering smooth gameplay.

Flow 1.0 is a new visual effects library supporting both DirectX 12 and DirectX 11 that provides simulation and volume rendering of dynamic, combustible fluid, fire and smoke. The fluid simulations are modeled on a dynamic grid for maximum flexibility with the least memory impact. It offers several sample effects to explore Flow behavior where users can learn about adjustable parameters and control particle simulations. It is very reminiscent of the PhysX 3 Fluid Simulation Demo from about five years ago, though offers much more granularity of controls

FleX 1.1 is a DirectX 12 compute technique that generates unified particle-based simulations for real-time visual effects. In the past, some industry-specific apps such as Autodesk Maya’s nCloth and Softimage’s Lagoa were used for simulating several particle-intense substances offline away from the cloud. The goal with Flex is to enable different simulated substances to interact with each other seamlessly and in real-time. 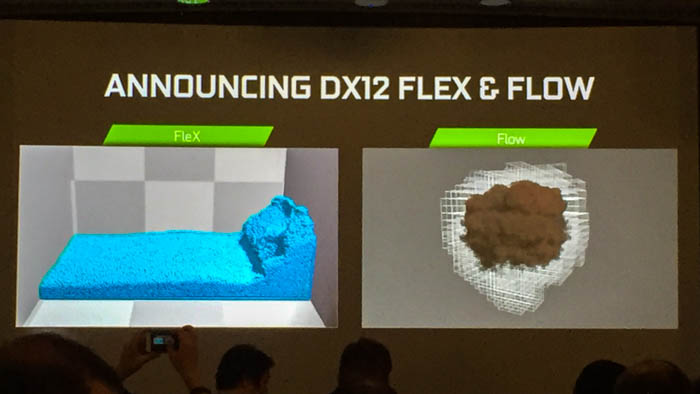 Both applications are available immediately for registered developers.

The company is also releasing a DirectX 12 optimized version of VRWorks for head mounted displays that now allows developers to achieve better performance, lower latency, and plug-and-play compatibility. The new version of the software suite will be supported in the Unity 2017.1 beta which arrives in Spring with the first Unreal Engine 4 games.