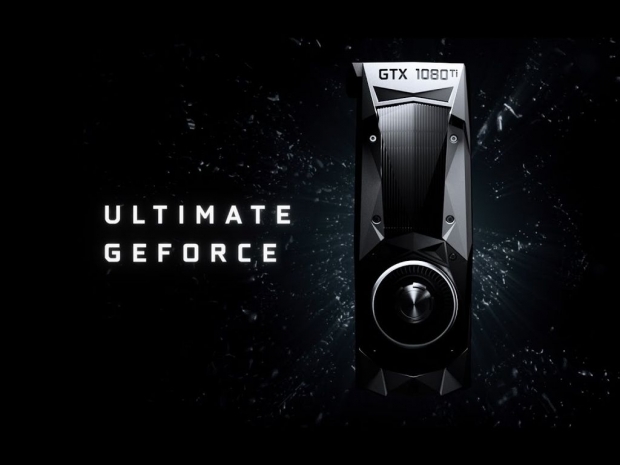 During Nvidia’s keynote at its Editors Day event in San Francisco, Jen-Hsun Huang took the stage to officially announce the Geforce GTX 1080 Ti to a public audience.

Off the top, the card features an 11GB frame buffer, a new dualFET power architecture and next-generation GDDR5X with an 11Gbps bandwidth rate. Using tiled caching and compression, memory bandwidth increases 2.4 times from 500GB/s to 1200GB/s. Jen-Hsun pointed to a historic chart showing traditional framebuffer usage in high-performance games since 2014 and the near linear increase in memory requirements as display sizes begin to scale into above-UHD resolutions. 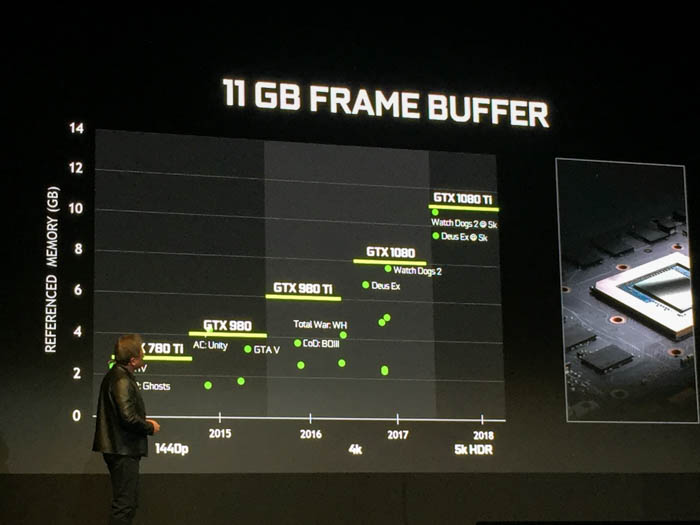 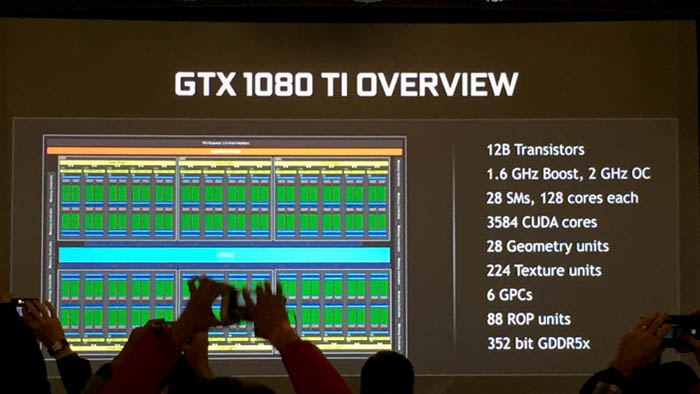 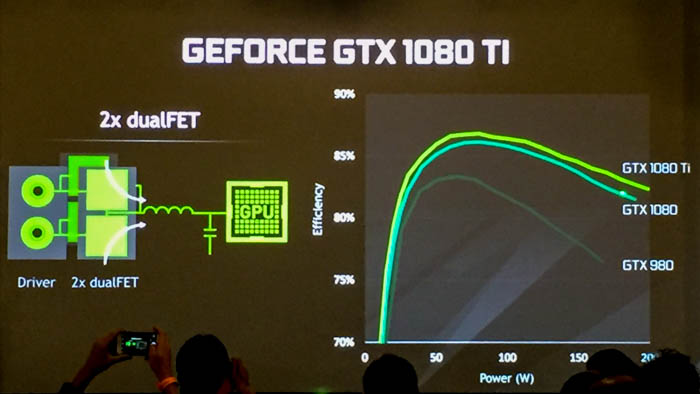 “The current that we deliver is lightning fast and it’s really stable,” Jen-Hsun says. “Stock out of the box, this card is faster than a Titan X Pascal and with the provided overclocking headroom, it can gain another 15 to 20 percent.” 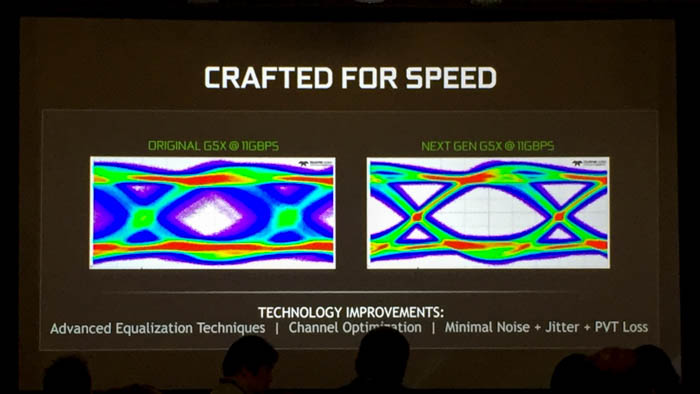 Memory architecture has also been a main optimization focus with this Ti generation release, and now Nvidia claims it has added several advanced equalization techniques with a "much cleaner signal" consisting of minimal noise, less jitter and less power, temperature and voltage (PVT) loss. With the addition of quad-data rate in GDDR5X memory, 4 data words are now transferred per write clock (WCK) cycle, though the technology still supports DDR mode as well. While the latter mode can significantly reduce the amount of power used by the chips, it is unclear which methods of PVT loss Nvidia is using to reduce noise and power output. There may be some optimizations to the delay-locked loop (DLL) timing characteristics to enhance its grasp to the oncoming signal, as the number of delay units used for WCK cycles can change depending on temperature, and thus can affect performance. The DLL is needed in QDR mode for very high data rates, but if it is disabled then DDR mode is required. Other possibilities including a larger prefetch size, though Micron has not detailed any changes to its GDDR5X production process so much of these improvements could indeed be Nvidia's doing.

During the presentation, Jen-Hsun showed the card running out of the box at a 2.04GHz core clock at a 66C temperature with an 11.2Gbps memory clock. 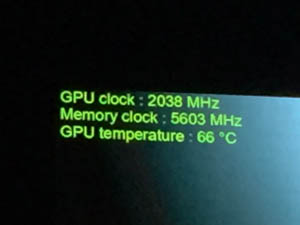 “At a certain amount of fan noise, you want to be able to bring the cooler down to a desired temperature range,” Alben says. “At 35db of noise, the new cooler can run 5C cooler and can operate around 2.5db quieter at the same temperature levels.” 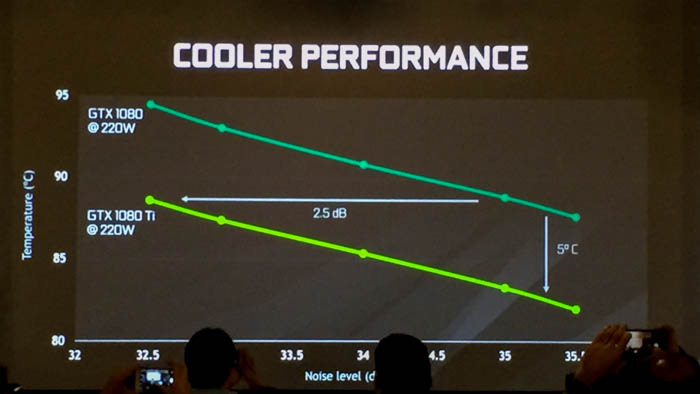 As for pricing and available, the new GTX 1080 Ti will be launching at the same price for both Founders Edition units and partner cards at an MSRP of $699. Meanwhile, the standard GTX 1080 is receiving a price drop down to $499 in order to deliver a more affordable premium gaming experience to an even larger audience of gamers that was previously available.

AMD announced some new RX Vega cards during its Capsaicin event earlier today, though specifications on those particular cards have remained scarce for now. The pricing competition is sure to get interesting now that GTX 1080 has dropped by $100 and Nvidia prepares to launch a new flagship next week. We will have a review and further hands-on coverage available for our readers shortly.

Last modified on 02 March 2017
Rate this item
(0 votes)
Tagged under
More in this category: « AMD to brand its next-gen as Radeon RX Vega Nvidia cuts Geforce GTX 1080 price »
back to top