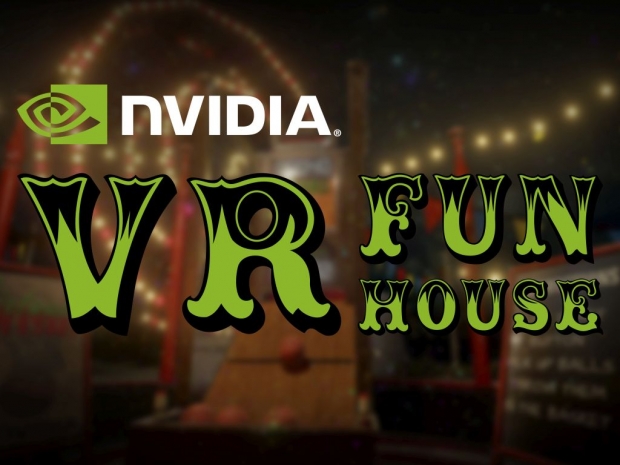 Nvidia has released its newest Geforce 368.81 WHQL drivers, which are also both Game and VR Ready, and has released the Nvidia VR Fun House, a set of mini-games to show off some VR and Nvidia technologies in action.

According to the release notes, it appears that the new Geforce 368.81 WHQL drivers are pretty much all about Virtual Reality (VR) as they provide an optimal experience for new and upcoming VR titles like the Nvidia VR Funhouse, Everest VR, Obduction, Raw Data and the Assembly.

The new Geforce 368.81 WHQL drivers also fix a couple of big issues noticed on Nvidia Pascal based graphics cards earlier, including the lack of GPU Boost in VR games as well as the issue with HTC Vive and DisplayPort outputs. There are also a couple of other fixed issues including corruption seen when booting on DVI at or above 330MHz pixel clock and 80Hz refresh rate, noticed on GP104-based graphics cards.

In addition to new drivers, Nvidia has also released the Nvidia VR Funhouse to Steam as a Free to Play title. Based on Unreal Engine 4, the Nvidia VR Fun House is a set of seven mini-games meant to demonstrate Virtual Reality in a fun way as well as use some of Nvidia technologies, like the FleX, Flow, HairWorks, PhysX Destruction and Multi-Res Shading.

Currently, the VR Fun House only works with HTC Vive VR headset and its controllers and is quite demanding as it needs at least Geforce GTX 980 Ti or GTX 1060 6GB (according to Steam page) and a Core i7-4790 in order to run it at low settings. The GTX 1080 and Intel Core i7-5930 are needed for medium quality settings and if you want to max it out, you'll still need the same CPU, a single GTX 1080 or two GTX 980 Ti, Titan X or GTX 1070 graphics cards as well as a GTX 980 Ti as a dedicated PhysX GPU.

The VR Fun House mini-games sound fun and Nvidia technologies certainly make it look good but with such high requirements, you'll need a deep pocket to run it in its full glory.

As always, you can find the new Geforce 368.81 WHQL Game Ready driver over at Nvidia driver support page or automatically via Geforce Experience, while Nvidia VR Fun House is Free to Play on Steam.