Earlier today we briefly mentioned that the Nvidia GTX 680 will have a very high GPU clock and now that the official Nvidia GTX 680 slide is out it appears that this 28nm GPU will end up working at a quite impressive 1006MHz.

The slide was leaked by PCOnline.com.cn site and it appears to be the real deal. The spec list kicks of with already rumored and pretty much confirmed number of 1536 CUDA Cores. The base clock as Nvidia now calls it is set at 1006MHz and we now have something called the "boost clock" which is set at 1058MHz. The GTX 680 card packs 2GB of GDDR5 memory paired up with a 256-bit memory interface and clocked at 6.0Gbps.

The TDP is 195W, in line with earlier reports, and the card needs two 6-pin PCI-Express power connectors. Display output configuration includes two DVI, one HDMI and one DisplayPort and the card features support for PCI-Express 3.0 x16 interface. 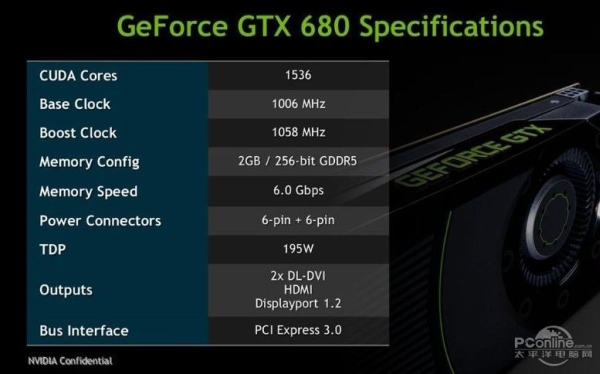