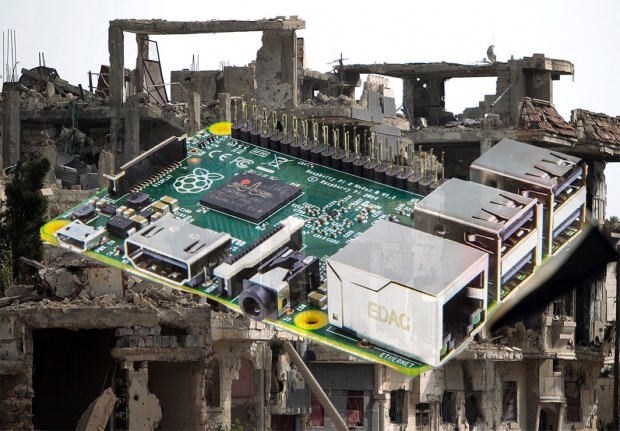 Dubbed Pocket FMs, they have been built by Media in Cooperation and Transition, a Berlin based NGO as a way of providing Syrians with independent radio. The devices have a range of between 4 to 6km (2.5 to 3.75 miles), which is enough to cover an entire town.

More than 24 radios have been built, and the designer says they are intended to be as easy to set up as a piece of flat-pack furniture [that tricky?.ed] and so far they work well.

Philipp Hochleichter told BBC Radio 4's PM programme that only one device had failed and that was because someone dropped a bomb on it.  Several radio stations share the same channel transmitted to parts of Syria.

"We tried to develop a small box that is easy to carry around, easy to transport, easy to hide [and] that is based on 12 volts so you can connect it to a solar system or a car battery", Hochleichter said.

The devices pick up a satellite feed of the channel, and rebroadcast it on a FM frequency, so people in Syria can listen on ordinary radios. Eventually, the devices will be capable of picking up the Syrnet channel via wi-fi and mobile data. The channel is also available to listen to online, and via a mobile app.

The Pocket FMs operate in the areas not controlled by either President Bashar al-Assad's regime or the so-called Islamic State militants.