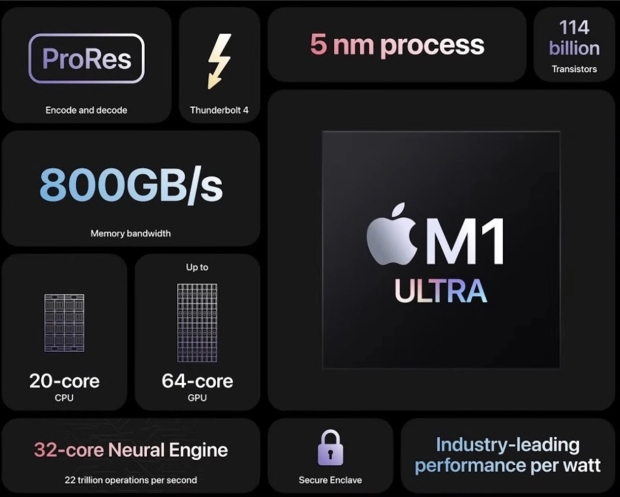 Two to three years behind Nvidia and AMD

The fruity and nutty cargo cult Apple’s claims that it has created a chip with a GPU which can match the best on the market is proving to be about as fake as Putin’s claim to be winning the Ukraine war.

For those who came in late, when Apple released its M1 Ultra chip, it claimed that the chip could match the best GPU on offer. The fake reporters in the Tame Apple Press sacrificed what was left of their street cred on the bonfire of Apple’s deluded vanity and printed the claim in their much-shrunken organs.

As we reported, some of the early tests started to show that not only was Apple’s claim a little bit off, it woefully inaccurate. Now some other tests are revealing just how bad the claim is.

Tom's Guide tested a Mac Studio workstation equipped with an M1 Ultra with the Geekbench 5.4 CPU benchmarks "to get a sense of how effectively it handles single-core and multi-core workflows."

The Ultra-powered Studio was slower to transcode video and took four minutes to transcode a 4K video down to 1080p using Handbrake.

When the Mac Studio review unit was put through the Geekbench 5.4 OpenCL test (the Ultra earned an average score of 83,868. Well below Nvidia GPUs in similarly-priced systems.

Results from the OpenCL Benchmarks browser puts the M1 Ultra down the list, with an average score of 83,940.

Last modified on 21 March 2022
Rate this item
(5 votes)
Tagged under
More in this category: « Open source might be a Ukraine war casualty Russians rush to download Wackpedia before it disappears »
back to top