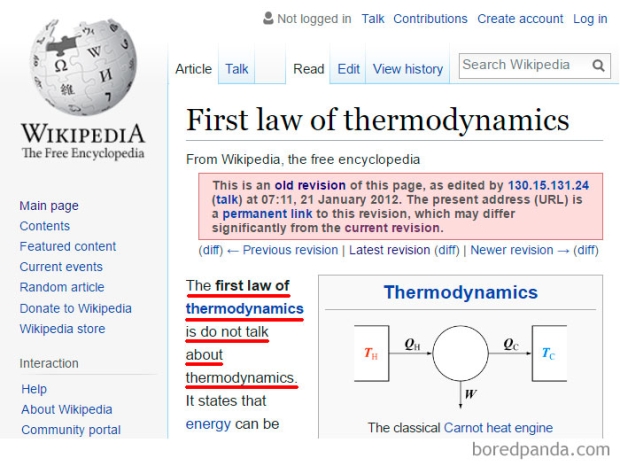 Wikipedia editors decided that an African-American man from Florida was serial killer Nathaniel White for nearly two and a half years and is proud of the fact that US Justice protects it from this sort of thing.

For more than two years, Wikipedia illustrated its article on New York serial killer Nathaniel White with the police photo of an African-American man from Florida who happened to have the same name. A Wikipedia user said he had found the picture on crimefeed.com, a "true crime" site associated with the Discovery Channel, which also used the same photo in a TV broadcast on the serial killer.

The page was viewed over 125,000 times, including nearly 12,000 times on the day the TV programme ran. The man whose picture was used said he received threats from people who assumed he really was the killer, and took to dressing incognito.

Thanks to Wackypedia his picture is now all over Google when people search for the serial killer. White sued Wackpedia only to find his case thrown out by a US court because the Judge was bound by the protections afforded by Section 230 of the Communications Decency Act.

"Our ability to maintain and grow the world's largest repository of free knowledge depends on robust legal immunity. The Wikimedia Foundation applauds this ruling and remains committed to protecting global exchange of knowledge and freedom of expression across the internet."

But while the Judge might have been correct when it came to the Communications Decency Act protecting Wackypedia the law probably did not understand how Wackypedia editors work. For example, no one seemed to ask why it took two and a half years for the editors to remove the picture.

Andreas Kolbe pointed out on Signpost that for a man to have his face presented to the world as that of a serial killer on a top-20 website, for such a significant amount of time, can hardly be described as indicative of 'very effective' quality control on the part of the community.

In fact, the picture was only removed after a mainstream press report pointed out that Wikipedia had the wrong picture and was removed by an unknown member of the public, an IP address that had never been edited before, has not been edited since and the correction not undone.

The volunteer community seems to have been entirely unaware of the problem. So rather than use the case to highlight how wonderful Wackpedia is with its legal protections, it is probably a good time for the outfit to face up to the fact that its edit system is borked, probably institutionally toxic and needs a rethink. Would Wikipedia's editors have reacted quicker to take down the picture if they had defamed a white guy? Is the system requires a pathological belief in the authority of secondary rather than primary sources its undoing? Are Wikipedia's editors so used to their god-like powers over who has the right to speak and exist that they now decide who commits crimes?

Kolbe ultimately asks if there's a deeper moral question in a world where a man was "defamed on our global top-20 website with absolute impunity, without his having any realistic hope of redress for what happened to him.

On the day the picture was removed from the article, a video about the serial killer was uploaded to YouTube — complete with White's picture, citing Wikipedia. At the time of writing, the video's title page with White's colour picture is the top Google image result in searches for the serial killer. All in all, seven of Google's top-fifteen image search results for Nathaniel White serial killer today feature White's image. Unfortunately, only two black-and-white photos show what seems to have been the natural killer.

A comment on the Wikimedia Foundation blog adds, "What I'd much rather see is an acknowledgement that the community process failed White to an extreme degree and that steps will be taken to prevent recurrence of such cases."

It won't happen of course, when idiots have power they rarely let it go. After Wackypedia editors have been deciding who is notable or not, which books or magazines people write, and which magazines are published for decades now and no one has stopped them.

Last modified on 08 November 2021
Rate this item
(2 votes)
Tagged under
More in this category: « System76's Pop!_OS Linux to create Rust based desktop 5G might stuff up aircraft »
back to top