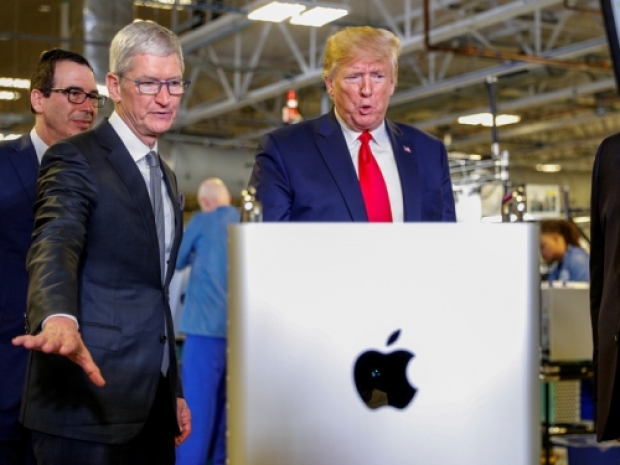 Amazing what a subpoena will get you

Fruity cargo cult Apple has admitted that it helped the Trump administration Justice Department by handing over shedloads of data of House Intelligence Committee Democrats -- including Chairman Adam Schiff -- along with their staff and family members as part of a leak investigation.

Rep. Eric Swalwell of California, another Democrat on the committee, told CNN's Don Lemon that he was notified that his data had been seized as part of the probe as well. So it was not just a democratic party witch hunt Trump was carrying out.

The prosecutors, the New York Times first reported, were looking for the sources behind news stories about contacts between Russia and Trump associates. The leak hunt began with the FBI sending a subpoena to Apple in February 2018, which included a gag order, seeking metadata on more than 100 accounts as part of an investigation into the disclosure of classified information, the person familiar with the matter said.

The gag order was renewed three times before it expired this year and Apple notified the customers. The House Intelligence Committee determined that along with members of the panel and staff, the dragnet collected the records of family members, including at least one minor, the person said.

Records seized included those from staff members who had nothing to do with issues related to Russia or former FBI Director James Comey, including Schiff's personal office staff, a House Intelligence Committee source told CNN.

Democratic committee leadership is relying on self-reporting to know who has been impacted at this point -- both members and staff, the source said. Swalwell confirmed to CNN that records of family members and a minor had been obtained.

The fruity cargo cult Apple said it has since tightened some of its rules for responding to legal requests. Apparently, it is now only going to give the spooks a limit of 25 identifiers such as email addresses or phone numbers per legal request.

Apple admitted it received a subpoena from the Justice Department in February 2018 for information on 109 identifiers made up of 73 phone numbers and 36 email addresses, but that it did not release content such as emails and pictures to prosecutors.

Of course, that should be enough. Trump’s DoJ was after the names and addresses of contacts who dared to reveal contacts between Trump's associates and Russia.

The investigation targeted at least two Democrats on the House of Representatives Intelligence Committee, aides and family members, including one minor, the Times reported.

Apple said that it had no way to tell what the nature of the investigation was and released only basic "account subscriber information" such as names, addresses, email addresses and telephone numbers, as well as connection logs and IP addresses.

Justice Department Inspector General Michael Horowitz said he will investigate the department's efforts under Trump to seize the communications data of lawmakers and members of the news media.

Last modified on 14 June 2021
Rate this item
(5 votes)
Tagged under
More in this category: « New York brings in right to repair bill Apple pays millions to make sex tape go away »
back to top