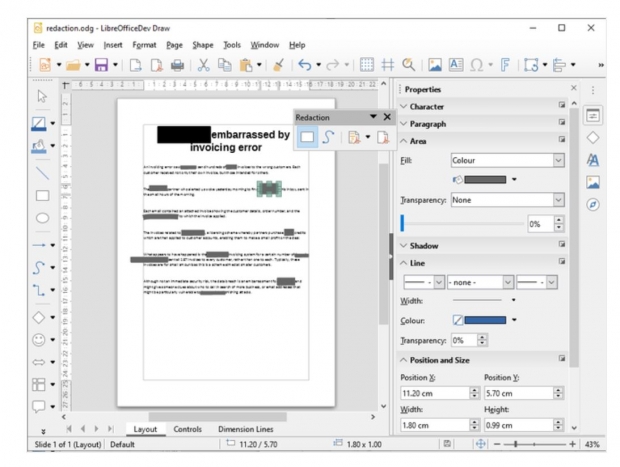 There are several performance improvements related to loading and saving documents in Writer and Calc.  For example there is a FOURIER() function in its spreadsheet app Calc.

The biggest improvement are the document redaction tools which enables you to stick black bars you see across sensitive passages in documents that are only intended to be partially released.

When you select Tools⟶Redact, a Draw window opens up with your flattened document in it. So does a simplified toolset allowing you to draw boxes or scribble over content you don't want to expose. When you're done, you can export the redacted version of a document; this produces a completely flattened PDF. There are no hidden text elements to be sleuthed out by pesky journalists.

The default transparency of redaction boxes and scribbles is set to 50 percent, which conveniently allows you to see exactly what you've redacted. The danger is that you could hit the "direct PDF export" button on the redaction toolbox and produce a PDF that looks just like the one on the screen, with all the "redacted" parts clearly visible.

Last modified on 14 August 2019
Rate this item
(4 votes)
Tagged under
More in this category: « AMD has Navi 23 which will cause Nvidia some grief Big hole found in Microsoft protocol »
back to top