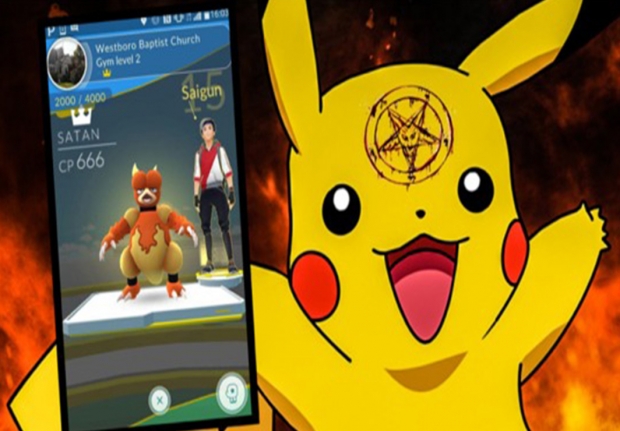 Saudi Arabian clerics have renewed a 15-year-old ban on Pokemon as the “satanic game” starts to possess the rest of the world.

The General Secretariat of the Council of Senior Religious Scholars reaffirmed a 2001 ban on the game following the release of a new highly popular augmented reality version of the game. Fatwa no. 21,758 lists many “sinful” aspects of Pokemon which no doubt have not been noticed by players.

Apparently the game is seen as a form of gambling, which itself is forbidden. It apparently encourages a belief in Darwin’s theory of evolution which everyone knows is satanic. Lastly it promotes the Shinto religion of Japan, Christianity, Freemasonry and “global Zionism”.

“The symbols and logos of devious religions and organizations are used including the six-pointed star: You rarely find a card that does not contain such a star. It is associated with Judaism, the logo and sign of the State of Israel, and the first symbol of the Masonry organizations in the world,” the ruling says.

Eh? What? This logic is so nutty you expect to spot it in the US Bible belt which also thinks that Pokemon is satanic. Other countries where the game is not in favor with the authorities include Egypt, where Hamdi Bakheet, a member of the committee of defense and national security, told parliament that the game was being used for espionage by the country’s enemies.

“Pokemon Go is the latest tool used by spy agencies in the intel war, a cunning despicable app that tries to infiltrate our communities in the most innocent way under the pretext of entertainment. But all they really want is to spy on people and the state,” he said.

Last modified on 21 July 2016
Rate this item
(9 votes)
Tagged under
More in this category: « Has Microsoft given up on Windows? China backs the Imperialist publishers »
back to top