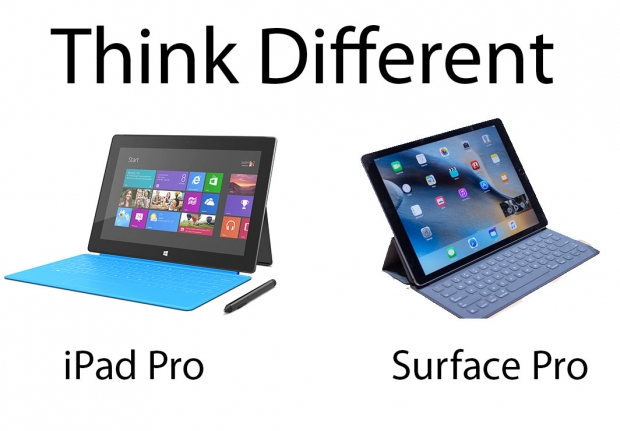 Apple’s version of Microsoft’s Surface PC will be available offering shedloads of technology that fanboys have mocked for years with a reassuringly expensive price tag.

The iPad Pro will be available to order online on Wednesday and arrive at stores later this week.

For a while now Apple has been telling its users that they did not really want the same keyboard or a stylus which had been part of the Microsoft Surface tablet for years. Now it turns out that it is ok to want these things provided you pay Apple a lot of dosh from the the same things fanboys mocked.  Of course Microsoft's stylus is completely different from an Apple Pencil – the pencil costs $100 for a start.

Its 12.9 inch-screen tablet, starts at $799 but costs more than $1,000 if buyers also want a keyboard and an optional stylus which will make it look like you have a proper Microsoft based computer.

The expensive knock-off will be available in more than 40 countries, including the United States, the UK, China and Japan.

Sales of iPads have been falling for several quarters as big-screen iPhones appeal to more consumers. Clearly Apple reasoned that the only way to stop the rot was by going back to the Tablet’s roots and see what Microsoft did. After all Microsoft was doing rather well flogging its tablets to businesses, which is somewhere Apple wanted to go

Research firm Forrester projects that sales to businesses will represent as much as 20 percent of the overall tablet market by 2018, compared to 14 percent this year, as the market grows from 218 million units to 250 million units.

Last modified on 10 November 2015
Rate this item
(11 votes)
Tagged under
More in this category: « MediaTek posts record results Compal gets Dell and Lenovo orders »
back to top