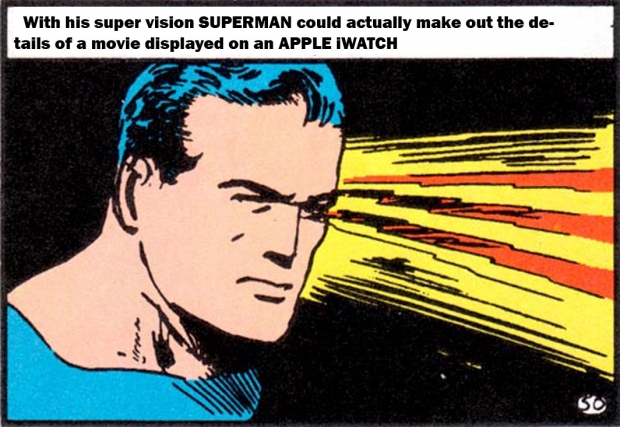 For those who have the Superman's eyes

After Apple released its iWatch the industry has been trying to think of things it can be used for and Twitter has apparently come up with the daftest.

Kevin Lynch, Apple's vice president of technology, demoed some new functions, including video, that will be possible on the second version of the Watch's operating system, which arrives in the fall.

During the demo, he showed a video of someone clinking drinking glasses on the Vine app. Vine later posted on its Twitter feed that its app would arrive on the Apple Watch later this year. Vine's app lets people record and share looped videos up to six seconds in length. So just as you get your eyes focused it will be finished.

Apple's Watch currently does not support video, but watchOS 2, announced Monday, would allow that capability, as well as new watch faces and other advances like faster app response times.

Facebook, which now has plenty of auto-playing videos in its main app, does not yet have an Apple Watch app.
It still will be some time before you can record video with the Apple Watch or even take a picture with it. The first-generation model does not have a camera on it, though it can act as a viewfinder for the iPhone camera but if you are going to take that out of your pocket the Watch's function is redundant.

Last modified on 11 June 2015
Rate this item
(0 votes)
Tagged under
More in this category: « Qualcomm gets Chinese shake-up Samsung claims it is King of the LTE patents »
back to top