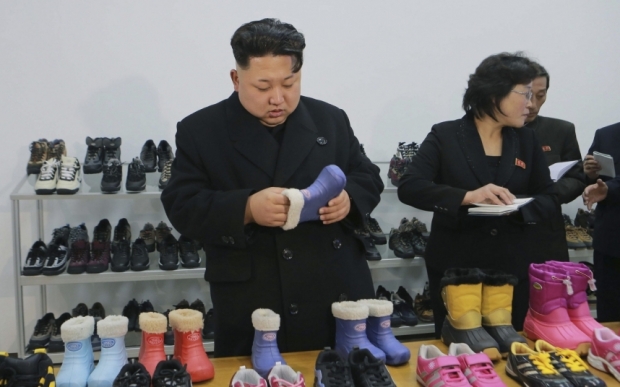 Kim Jong Un is ahead of the West in all ways

The Steve Jobs of Asia, North Korea's Kim Jong Un who already invented a wall garden to keep his citizens in and a reality distortion field, has now invented online shopping.

His brilliant idea is to allow people to use their North Korean debit card system to buy products from North Korean companies including women's clothing, bags, shoes, medicines, cosmetics, furniture and food. This will mean that rather than queuing for products, workers can have their products delivered to them by the postman.

Of course there are a few novel tweaks to the idea to keep people locked into the North Korean world. The site does not works on the World Wide Web but on North Korea's own intranet.

North Koreans call it the "domestic web" and it's been around for years, but not used very much, largely because very few North Koreans have personal-use computers that can go online at all.

While mobile phones are still largely absent from the countryside, it has become common to see people using them while walking down the streets of the capital. North Korea began allowing their broad use in 2008. By 2013, the number of mobile and smartphones mushroomed to about 2 million, or nearly one for every 10 North Koreans.

Best Korea's mobile phone network, Koryolink, started allowing customers to use their phones to look at a very limited number of local websites — such as the ruling party newspaper, the state news agency, a TV show download site, a local university site and a science and technology site called "Hot Wind" which sounds like MacWorld to us.

Okryu (pronounced ong-yu) is managed by the General Bureau of Public Service, a government organization that oversees shops, restaurants and producers of consumer goods. Bureau official Jong Sol Hwa recently confirmed the online shopping site, announced with much pride by state media last month, is up and running.

During a demonstration for an AP Television News crew, a bureau official clicked on the site for the Kumsong Food Factory in Pyongyang and scrolled down to a pack of cream buns, which brought up a new page with prices which were the same as stores in Pyongyang.

Rate this item
(9 votes)
Tagged under
More in this category: « Intel sees growth in Africa Asian panel makers improve »
back to top