For the past few months, AT&T and Verizon's corporate executives have been pondering the idea of "shared family data plans," or in other words, single data plans that can be allocated and distributed among multiple members of the same paying group. 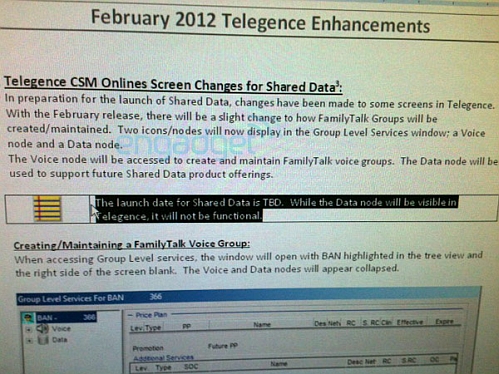 According to a recent leaked screenshot discovered by an anonymous tipster at Engadget, it appears that AT&T has already begun preparations by making changes in Telegence, its corporate billing system for customer accounts. According to the changes that must be debriefed with AT&T employees, "the Data node [of Telegence] will be used to support future Shared Data product offerings."

Nevertheless, the language of the update suggests that new plans are coming in the very near future, but lacks any detail regarding a launch date or structure of said plans. We suspect that the company may be beginning its first wave of internal testing, if anything. Perhaps a better question to pose would be when Verizon will introduce (or leak) its competing shared data plans.