Last month, we reported that sources close to Bloomberg had claimed Apple's third-generation iPad would feature a quad-core ARM Cortex processor, a Retina Display similar to the iPhone 4 and iPhone 4S, and a 4G LTE radio compatible with both AT&T and Verizon's next-generation wireless networks. While all three of these speculative features are founded upon baseless rumors, we have reason to believe that only the 4G LTE rumor holds credible evidence as discovered by BoyGeniusReport via an anonymous tipster at PhoneArena. 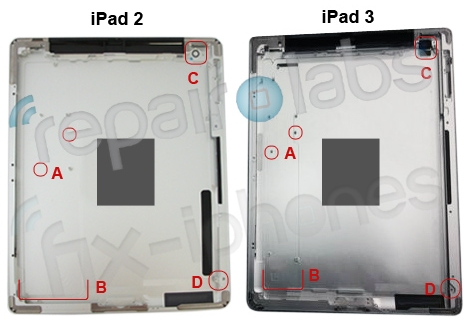 The images also reveal that the LCD mounting system has been redesigned. Whether or not the third-generation iPad will have a Retina Display with 2560 x 1536 or similar pixel resolution has yet to be confirmed. The finished product has yet to be signed off, but it seems clear that Apple will be implementing all-new IPS panels for these tablets.

Lastly, the images show that the device's camera lens positioning seems closer to the top-right edge than the iPad 2, suggesting either a new CMOS sensor entirely or simply a repositioning of the current sensor technology.

Nevertheless, we expect Apple will formally announce its plans in early March as it did with its second-generation tablet. The iPad 2 was announced on March 2, 2011 and made available the following Friday on March 11, 2011. We expect a similar announcement and release strategy for the third-generation device.